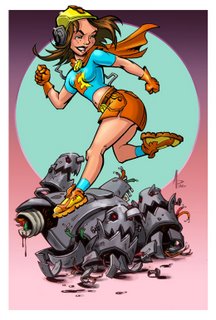 I've been dying to show this piece for awhile now. My friend Brock Rizy asked me to contribute a pin-up for his new book- Emily Edison. Ol' Brock is doing the art chores on this one, with writing contributions by David Hopkins. They just announced it in the latest Previews catalog. It'll be coming out through Viper comics, this June. Just in time for San Diego con, so keep your eyes open suckas!
Posted by Augie Pagan at 1:50 AM 6 comments: 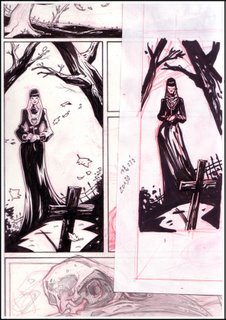 Man. Not even sure if anyone's been by since I haven't posted in awhile. Thought I'd share a page in progress, just so people don't think I've been slackin'. Basically, me and some friends at work have been collaborating on mini anthology comics for the Emerald Con the past couple of years. This year we'll be pimping Atomic Lead #1.

Unfortunately, I didn't have time to write a story this year, so I decided to attempt a visual translation of a Johnny Cash song called 'Long Black Veil'.

In true Cash fashion, there's a murder, as well as a lover lost to the reaper, from two sinners that keep a secret that goes to the grave.

My dad has always been a huge Cash fan. It's not as well known as other Cash songs, but as a kid, my pops would work it into his "Johnny Cash set list" when playing his guitar.

Anyway, the page on the right is a rough black and white breakdown of the final panel you see on the left. If you want to see the rest of the finished page, well, by the comic suckas!

After these pages wrap up, I'll be finishing some paintings for a gallery show I have planned for June. I'll try and post some sketches of that soon. Alright kids, that's the 411.