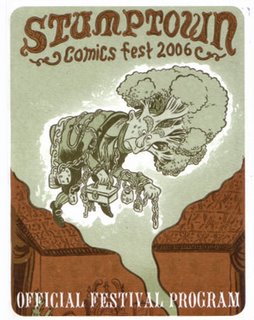 Last Friday and Saturday was Portland's day and a half comic fest, Stumpfest. Rolled down there with the art crew, set up camp, bought, sold, and traded art. It was good times. Meet lots of cool people that came by the tables, and got reacquainted with a bunch of old familiar faces. 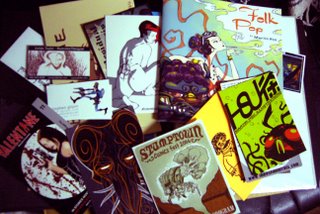 Here's a bad picture of some of the loot. Speaking of pictures, I think there are some pics from the show on the Stumpfest blog. 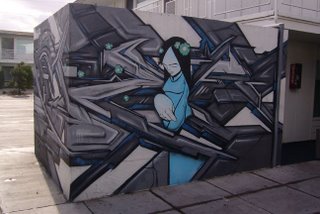 Here's a mural at the hotel we stayed at. It's called the Sam Flores hotel, I mean, uh, the Jupiter hotel. The above mural is actually a mural by said artist himself, Senior Flores. Good stuff. 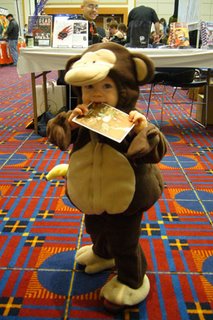 Last but not least is a pic of a typical Stumpfest fan. They're getting younger every year. Maybe it's because the comics are so tasty with mad flavor. The little monkey above is actually our friend Suzanne's daughter Elenore. C'mon, say it- AWWWWWWWWW. Anyway, good times in Portland for sure. Can't wait for next year's Stumpfest. 'Till then.....
Posted by Augie Pagan at 1:12 AM

Awwwwwwwwwww is right!
Yup, it was a blast. Let's all go again next year Aug!