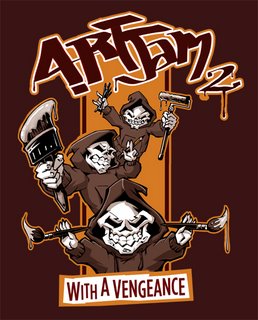 Oh man. Art Jam II With a Vengeance, definitely came back with a vengeance last Saturday. It was another great night of art, music and friends hanging out at Georgetown's 9lb Hammer for the second Art Jam. Once again, local Seattle artists (and Portland) from all backgrounds of art came out to create art and collab. Also, before I forget. I wasn't able to get as many pictures that night as I wanted. Two people came throught with that. One of our photographers came all the way from Portland to take pics. Ryan Bubnis's girlfriend Cecilia was at the ready with her camera. You can check out Cecilia's pics by clicking HERE.
Also, our buddy Lawrence came out to paint, and when he wasn't doing that, he was taking pics too. Check out his flickr account HERE. 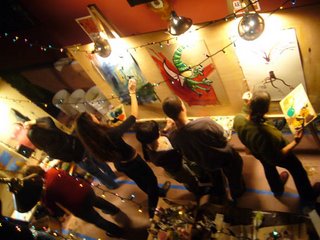 There were a lot of familiar faces from the last art jam, as well as some new ones. 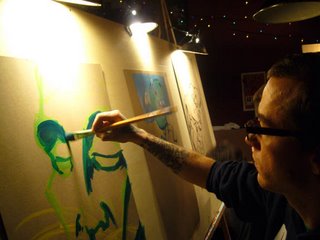 Joby from Art Core Studios came out again and cranked out this cool portrait. 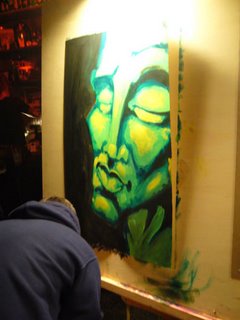 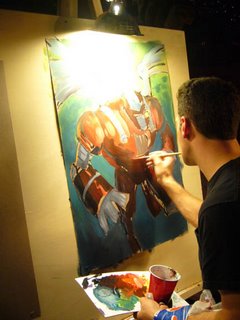 Shane White was back again and attacked the boards with his mad painting skills.
In the pic below, you can see Joe Kresoja's arm going to town on one of his own creatures. 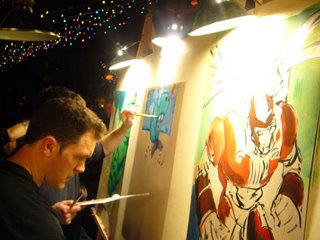 Here's a better shot of Joe's finished piece below. 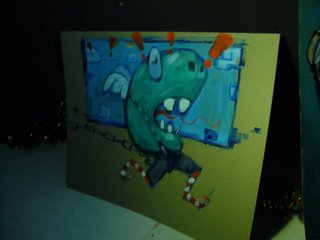 Local Georgetown artist, and part time MC for the evening, Chris Pfeifle, managed to crank out some art when he wasn't on the mic. 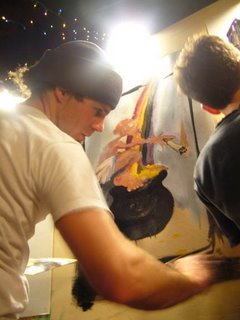 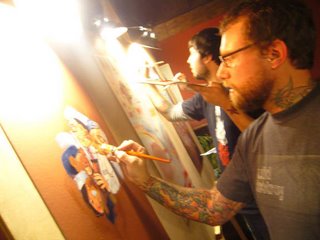 Another Georgetown artist, Chris Gay, from Art Core studios, came out to do another one of his painting/collage pieces. 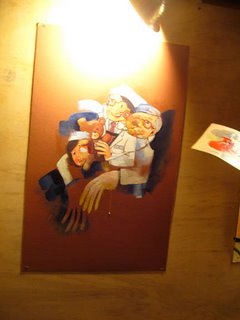 One of the surprises of the night for me was finding out at the last minute that Portland's own Ryan Bubnis was going to be able to make it out for the art jam. Ryan and his girlfriend Cecilia drove all the way up from Portland to be part of the art jam. Here's the beginning of one of his later pieces. 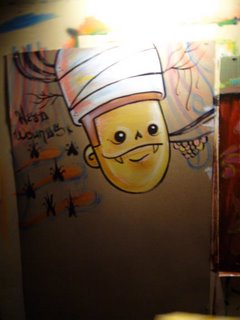 There were some happy art fans that walked away with some Bubnis originals. Thanks again for making the trek to Seattle holmes! 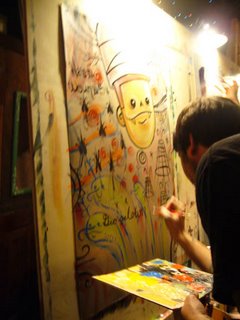 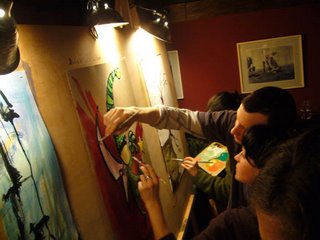 Wade and his girlfriend were back to do another joint collab. It's always fun watching them jam on a piece. They definitely have an art groove that works good together. 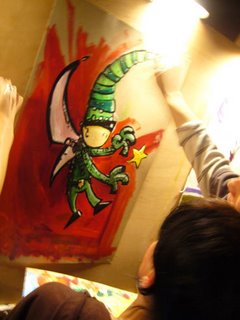 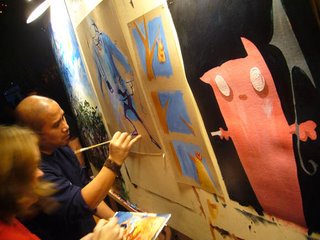 Here's a pic of some new blood that came out for the evening. In between popping off pics, Larry did a few cool art pieces. Next to him is Suzanne cranking out some of her characters. Representing her Stumpytown creations once again was Karin. That's the beginning of her painting on the far right in the above pic. 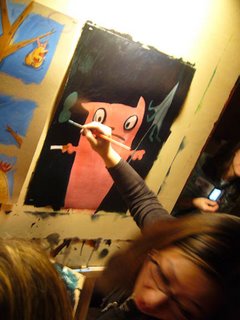 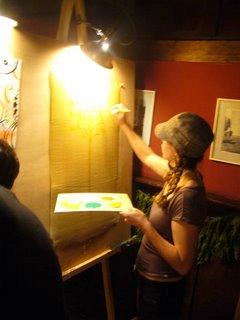 Maija was also back for the jam and did a bunch of pieces that night. I heard crazy stories over the course of the night about people having to draw straws to see who would walk away with one of her pieces. Luckily, with Joe Mazak managing the sales table, nobody was killed. 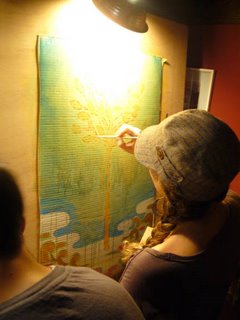 Once again, the festivities went up until last call. While all the patrons were leaving, and all the artists were packing up, Shane was the last artist standing. I thought everyone was done drawing and painting, but when I turned around towards the stage, Shane was going to town on this kick ass piece, below. I thought maybe this would be my chance to buy something that night after everyone was leaving, but when I went over to the sales table, it was gone. Someone snatched it up before I could. At an art jam like this, if you snooze, you loose. 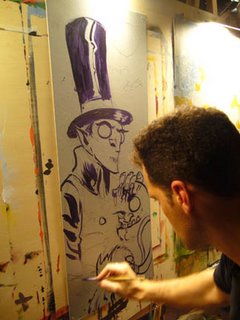 Once again, it was a great night, and everyone that attended had a blast. This time things went a lot smoother than the last one. Thanks, everyone, for coming out, and thanks to everyone that helped out with putting this one together once again. Also, check back regularly for any art jam news. From the sounds of it, there will be more parties like this in '07. Until then....stay frosty.
Posted by Augie Pagan at 4:23 AM

Ha.
That was a blast Augie!
I was tired as hell at the end of the night but I'm sure you were too.

Glad that it turned out so well and it was nice to see new faces.

Thanks again for putting on another kickass ArtJam Augie! We had a blast... can't wait for the next one.

Anonymous said...
This comment has been removed by a blog administrator.
9:56 PM

Anonymous said...
This comment has been removed by a blog administrator.
7:09 PM

Anonymous said...
This comment has been removed by a blog administrator.
9:56 AM

Love the work :-) I’ve just set up a blog that I’m uploading my scribbles to.

Hi!
I like your story.
But you'd better take a look here to find a really DIFFERENT dating site.
Looks amazing, agree? :-)
You can also find my pics and more about me on my page www.livedatesearch.com/jessica
Read more about me or drop me a message from there.
Chao!
Jessica