Just getting around to updating the blog folks. I just wanted to take this time to thank EVERYONE for coming out and supporting the show on Thursday. I was floored with the turnout and can't thank you people enough for taking the time to stop by, even if it was just for a peek. I saw old friends I haven't seen in years, and some My Spacers came out too. It was cool to finally meet you guys. All who showed up made it a very special night for me. I really can't put it into words but, basically you guys kick much ass and there needs to be more art nights like this in the future. 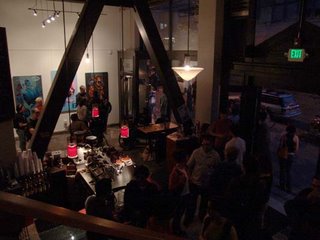 First off, thanks to the All City crew for letting me have the show and helping out hauling and hanging those big ass canvases.

Second, big thanks to Dev and Karin for not only putting together the sketchbook and buttons for the show, AND for manning the "booth". Comic con style baby!

Dave, thanks for holding down the funk on the wheels of steel, AND for the Sergio Leone request. That was the best. 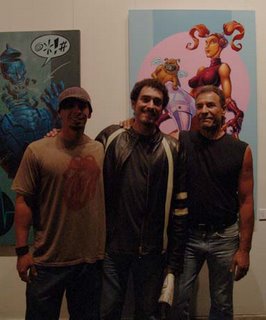 Another reason it was such a fun night for me was because my bro and pops flew all the way from Cali for the show. Having them in my corner made the evening complete. 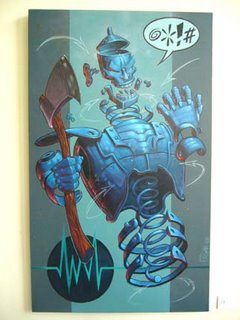 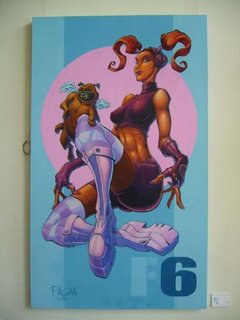 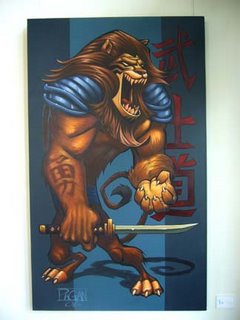 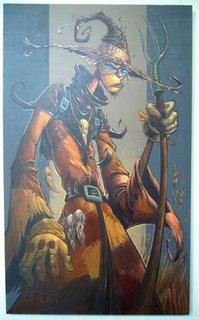 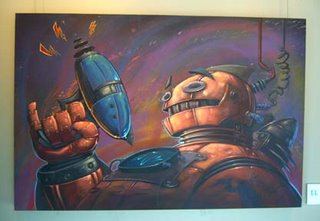 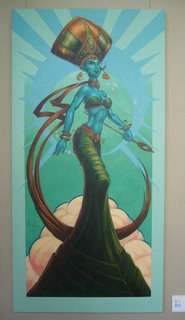 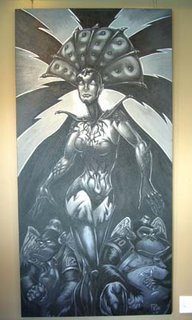 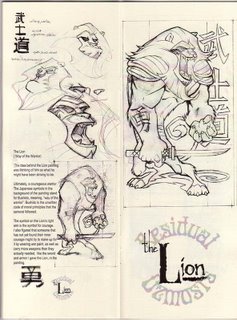 If you didn't get any of the buttons Karin made of the characters, you might be SOL. Those suckers sold quick. However, if you didn't get a sketch book (check out above pic) , I still have a small pile left so let me know and I'll dig one up for ya! People were also asking about prints. I'm looking into this and have a few leads. If anyone knows of some places that can shoot big 3x5 feet canvases, let me know. The more contacts the better.

I hope all that came out had a good time. One thing I took from that night was that a lot of people I talked to seem to be as frustrated as I am with the art scene in . Maybe this is something to be discussed another time, but I do know that people in this town want more art than what is supplied to them. People outside of the usual 'first Thursday' art circles dig this stuff too and they have no clue as to where to go and buy any kind of "Juxtapoz" type art, for lack of a better term. Why is that? I'm just a dude asking. Leave a comment, please, if you have any opinion on this. That's what this blog is for. Real feedback. Maybe I'm the dumbass that doesn't know what's going on in this town. Maybe I need to get out there more than I already do to find the answer. What I do know is that a small group of me and my friends managed to put a fun show together in our spare time, outside of normal work hours. Just imagine an even bigger group of people that did this full time and consistently put together enough shows that finally made people outside of this state stand up and take notice of what's going on up here with the local scene. Maybe, we'll actually be known for more than grunge, coffee, and computers some day.
Ok, I'll get off my soapbox. Sorry for the rant, but it feels like it's time to shake things up. I don't want to leave because of the reasons above. Maybe my perception is totally wrong. If so, leave a comment and tell me why, or, if you agree with anything I've said leave a comment and tell me how we can change things up. It's overdue.

Posted by Augie Pagan at 3:07 PM 20 comments: Links to this post