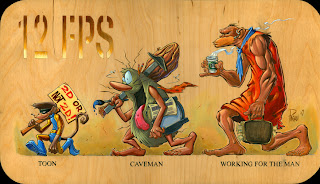 I thought I'd post some more pics (thanks Karin) from the Rocket World show last Friday. I also wanted to post some of the art from the rest of the show. The above piece of art is titled "The De-Evolution of Toons at 12 Frames Per Second." Long title, but a topic that seems to come up every now and then. With the success of 3D features, it seems that traditional feature films are getting pushed out (2D). People don't realize that it's the story that should matter, not the end result. Pixar's films are successful because of the stories, not because it's 3D. Then, what about the artists that can't make the transition to the 3D world, where do they go? More questions than answers, and I'm not the guy with answers for such big queries, so, moving right along.... 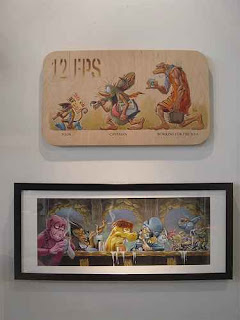 The above pic will give you and idea of the size of these things. The painting hanging below mine is Dev's epic take on the old Cereal mascots. If you're wondering, the guy in the middle is "Crunch Berry". 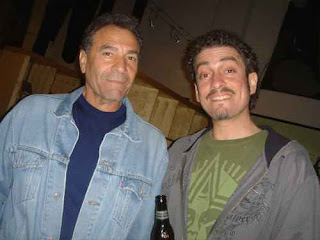 The folks don't make it out to the big city, so here's proof. The familia came all the way up from Gilroy for the show and didn't get lost. I'm so proud of them. Here's me an' pops. That dopey grin on my face is half drunky, and half happy that they found the gallery. 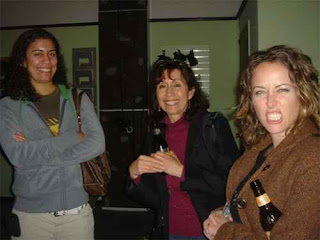 Here's a shot of my sister Alicia on the left, and mom in tha middle. Glad that they made it up in one piece. Another person that made the long trek to the city was Zibby. Classic Zib face. I think she's constipated. Alright, there's some more art I need to dig up, and then that's it. Posting blog stuff takes time away from painting when you have a slow computer. Stay tuned though. More art posts, more show info (NY next week baby!) and more updates on the website. Stay tooned.
Posted by Augie Pagan at 7:37 PM