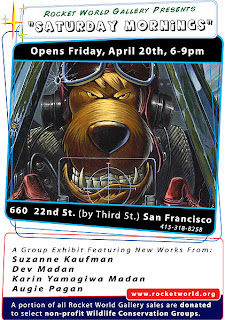 Alright suckas, here it is. Friday April 20th is the opening for the 'Saturday Mornings' group show I'm in with three other local Seattle artists. The show is in San Francisco at Rocket World. Check out the store for updates here. If you're in or around the Bay Area, pass this around and spread the word. All four artists will be in attendance and some of us will be selling prints as well as the original art on display. 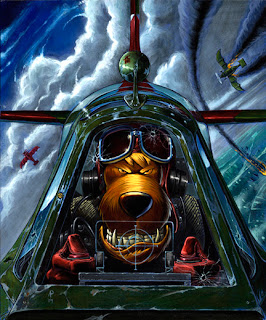 Above is a sneak peek of one the pieces I have in the show. This painting is kind of a two for one. On on hand, it's a fun interpretation of Muttley from the Hanna Barbara cartoons. On the other hand, if you happen to be an Iron Maiden fan, you'll totally recognize the Aces High album cover where I took the idea from. Growing up in the 80's, it was almost hard not to see an Iron Maiden t-shirt every now and then. The artwork that Derek Riggs did for that band was mind blowing and I don't know an artist that didn't draw Iron Maiden's mascot, Eddie, on their Pee-Chee folder. Anyway, call it an homage ,or whatever you want. Riggs's art was a big influence for me growing up, as much as the Hanna Barbara cartoons were. 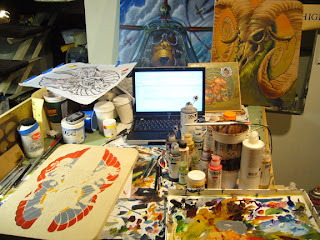 Here's a quick shot of my painting set up at the old Corson house in Georgetown. Just wanted to give you an idea of the sizes. You can see the Muttley painting back there, next to the Goat painting for the Zodiac show that's coming up on May 5th. In the foreground is a 'Year of the Dog' painting in progress for that same show. If you want to see the finished, check back often. I'll be posting more as these shows get closer. -I'm out.
Posted by Augie Pagan at 1:42 PM

Awesome Augie, your kicking some ass.

so seriously...when can i start the lessons? i really want to know how to paint...i wanna be able to do what you do with acrylics...sigh...love the bottle as well...bastard.hehe.

Sheeeeeit Gene, whatchoo talkin 'bout? I just saw the pics of your 40 ouncer on your blog. Those are dope holmes! Nice moves. Lessons? You're doin' it! If that Colt 45 didn't taste so bad, I'd say lets do another one for a trade.