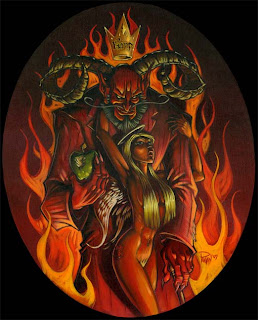 So, no more rants on this post. Let's just talk about art for a change. This latest piece is for a group show that goes down next month in Columbus, Ohio at the Artful Dodger Gallery. I was asked, awhile back to submit a painting for the first group show by tattoo artist Kat.

I met her last year when she was in town for the local tattoo convention. Since that initial meeting, she's acquired a space for her own tattoo business, as well as turning it into a gallery. Build it, and they will come.

The theme for the group show is the name of the gallery. The Artful Dodger. I have to admit, it was a little tough at first to come up with an idea for that theme. To me, that literal description. made me think, "Who is the most artful-ist dodger in history, ever"? Well, Satan of course.

You have to admit, since day one, Lucifer was right in there, without missing a beat, ready to stir things up. And let's face it, he pretty much, always gets away with it. You can't turn down original sin, and even if you don't want to admit it, EVERYONE commits a sin in some form. Even if it's stuffing your face with that last juicy turkey leg at Thanksgiving. That's right Mr/Mrs Gluttony, suck on that bone as children in Africa starve. Mmmm mmmmm good.

Satan was so clever, he would even sneak his evil messages into our children's favorite rock songs. So clever you'd have to play them backwards to hear them. 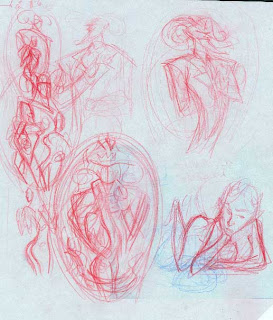 Here are really loose sketches done early on, just to get some ideas going. I can't remember why, I decided to go with the oval canvas. I think it just has more of a "portrait" feel to it, even though it's not really a portrait. Besides, I kept walking by the oval canvases at the art store. I never painted on one, so, what the hell. I think the canvas size I picked was 14"x16". 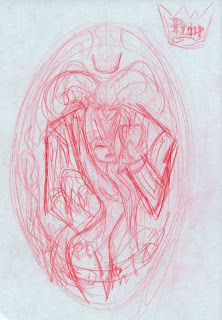 Having Satan tempting an angel seemed like a good idea for getting the whole artful dodger thing across, I thought. Artful at temptation. Artful at pimping. Hence, the apple, and the pimp crown.

After deciding on poses and such, the next step was tightening up the idea. The sketch on the far right felt like it was getting close to what I was picturing. That sketch was scanned in and measured out on the computer (middle sketch) so I could get a better feel for the oval canvas. I even started to go in on that sketch, in photoshop, and started to figure out the "evil Kirk" under lighting. There in hell, man. You HAVE to have evil under lighting. The far left sketch was tightened up over a print out of the middle sketch.

After that sketch was done, it was transfered to the canvas, and there you go, done. Sorry I don't have any step by step photos of the painting process. Maybe I'll have some for the next painting. I do have to show a close-up of the angel's tattoo, though. On here back thigh I wanted to have the L'il Devil character. Just having the devil and an angel posing in hell didn't seem like enough to me. With a tattoo of a cartoon devil and a bite taken out of the apple, there's no doubt as to who owns who in the painting. P-I-M-P. 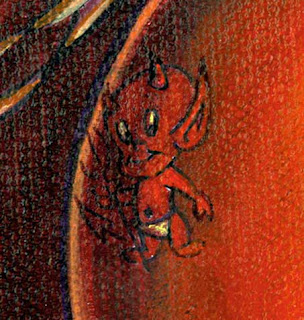 That's all for now kids. Next post: a t-shirt design, some roller derby poster action, and maybe even a report on Sweden, from Sweden. Stay tooned suckas!
Posted by Augie Pagan at 12:14 PM 3 comments: Links to this post