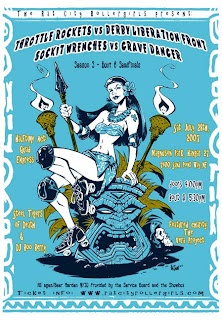 Been dying to post this latest piece off the drawing board. Got asked to do the Rat City Roller Girls poster awhile back. Had a blast doing this one. I'm dying to go the bout too. Never been to one, and can only remember actually watching it as a kid on the old Wide World of Sports (Howard Cosell era, thank you very much). I think there might have been a roller derby, Happy Days episode back in the day, too. Anyways........... 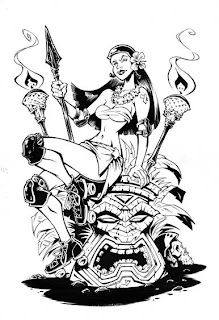 They asked for a Tiki themed poster. The only thing I didn't realize was that the "tiki sound" from that Brady Bunch Hawaii, two part special, would be ringing in my head the whole time I was drawing it.

Almost forgot. There's a black and white version of the poster in the Stranger this week. Go yoink one from your local "whatever place that has it" near you. 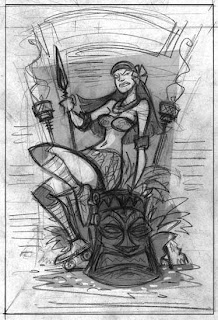 After drawing all the little sketches below, I sketched up the rough sketch above.

Not sure if you can make heads or tales of all these little preliminary roughs, but that's pretty much where the initial poster ideas were worked out, before it went to the final colored stage. I'm a slut for art books and love seeing the early rough sketches, so I thought I'd post a few here. Enjoy.

Oh , yeah, and this time, the website is really, really , really, really close to getting finished. No.....for real. I swear. No jokes. Just been slacking.........but not anymore. Stay tuned suckas!

Posted by Augie Pagan at 10:23 PM 5 comments: Links to this post 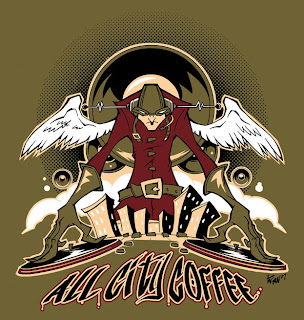 Here's the lowdown folks. The guys at All City Coffee asked me and four other artists to contribute a design for their new line of custom tee shirts. The assignment- do any design you want, as long as it has the All City logo. All five tees will be debuting at the All City coffee shop in Pioneer square for First Thursday. That means, all the galleries will be opening up that night for you to check out.

That's all fine and everything, but there's more. Not only will the new tees be for sale , but you get to watch all five artists perform live art that night. The art that's produced that evening will be on display and for sale for the whole month of July. Since it's the All City Georgetown crew bringing you this night of festivities, I don't have to tell you that there will be ass shaking music from our own neighborhood DJ's. Their crates are deep, and that's all you need to know.

Artists in attendance will be:

Corrie Greening
Chris Gay
Ryan Bubnis
Maija Fiebeg
and yours truly
If you want to check out the All City Website for info, click here.
If you're too lazy for that, then here you go: 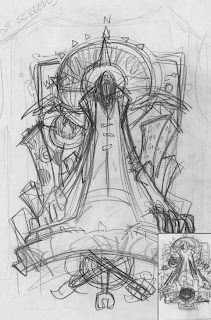 Anyway, here are a few pencil roughs for the t -shirt. The above sketch is actually two in one. The bottom right is a small 2"x3" thumbnail that I decided to go off of. I did some bigger sized sketches of that little design, trying to work out different design elements. I think the original idea kind of got lost when I edited out all the design-y crap.

To me the All City vibe is always about good music. When those guys throw a party, the vinyl is in full effect and asses are shakin. Also, the one way to tell if someone isn't from Georgetown, where the first All City started, is if they look up at the planes that fly over. All City is near the edge of Boeing field, and they get everyting from small bi-planes to big ass army jets flying over head.
If you're from the neighborhood, and a big loud plane flies over, you shut up and drink your coffee and wait 'till it passes before you finish your conversation. If your not from the 'hood, you rubberneck. 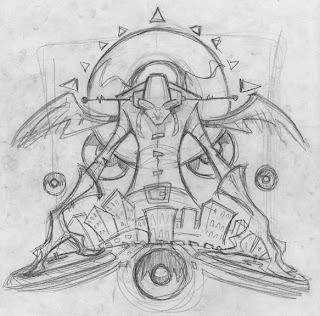 Here's' a closer version to the final. The most challenging part about this design was picking the colors. While doing it, I realized that I never did any t-shirts that were more than one color. Not being able to control exactly what the t-shirt color was or the PMS colors drove me crazy. It was still fun but I'm more curious to see the end result, and by the way, so can you. This Thursday suckas! Be there or etc, etc.
Posted by Augie Pagan at 7:39 PM 4 comments: Links to this post 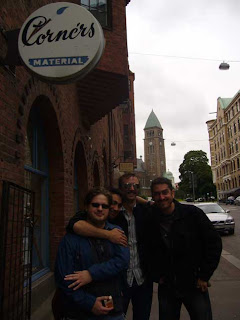 A good "friend of ours" (said in Donny Brasco accent) that moved to Sweden invited me Travis and Tom out to visit last week. Before leaving for the trip, I saw a lot of people that were asking about Mr Jay Sopp, (the Swede transplant) , and Mr Tom Witte, (who lives in NYC). I just thought I'd post some quick highlites of the trip.

For all that asked, Jay and his wife Anne are doing great out in Sweden, and it was great to see them. The first pick up top is me, Trav, Tom and Jay in front of an art store. What else are a group of artists going to do when they get together? We spent all that afternoon looking for Moleskine sketch books. Very particular ones, because artists are stubborn that way. Jay also wanted to show me some kick ass water color brushes, at this art store, but I was surprised to see that the art store also stocked pin striping brushes. Really good ones. The nice Swedish lady let us test out a few, and needless to saw, I had to pick one up. 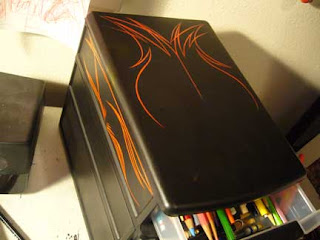 I wasted no time when I got home testing it out by practicing on my art supply storage thingy. Luckily you can't see all the sloppiness of the line work in the pic. (don't grade me yet Keith, I'm still in training)

Here was drunky night number one. This place served Mojitos by the pitcher with crushed ice, lemon and limes and passion fruit. They tasted like mojito slurpees. Very dangerous. Especially if you're allergic to passion fruit. Guess what Travis found out that night. Yup, passion fruit is his Kryptonite. 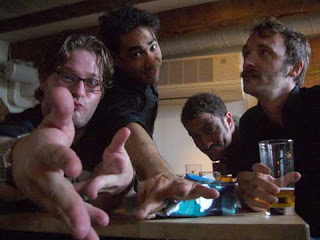 I have to point out that I haven't seen Tom in a long time. Tom (far left) has since grown quiet the mustache since I've seen him. Very Euro Mr. Witte. 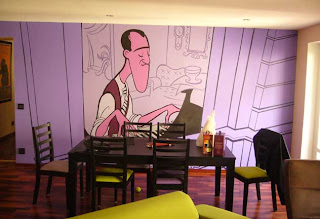 I forgot about Jay's tradition of painting big murals in every single place he's lived in, at least since I've known him. Check out the cool shout out to Hirschfeld in his living room. Hanging out at Jay's was like being in a cartoon. 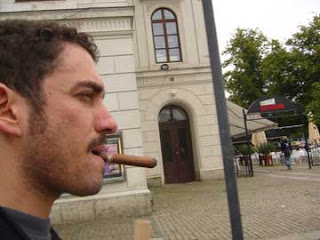 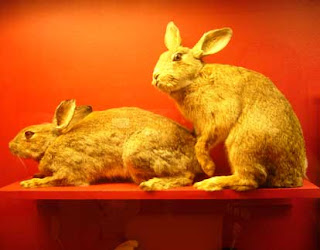 Some people might say that Swedes don't have a sense of humor, but I would differ. On a trip to the history museum, the Swedish taxidermist put these two rabbits in a very alluring position.
Swedes are also not afraid to show there affection in public. The big sperm whale below used to open up at the mouth and let people in to a cafe in the belly, until a couple was caught fornicating. Hence the name: The Gape of Sin cafe. 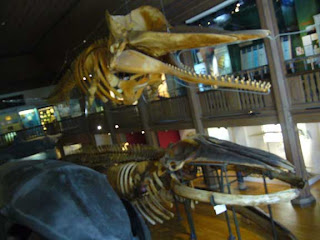 Swedes also love their Metal. Slayer was in town the week we were there. 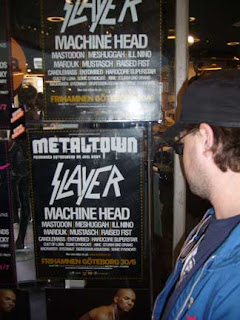 I didn't see any crazy graffiti in the city until the garage doors of the stores closed down at night. 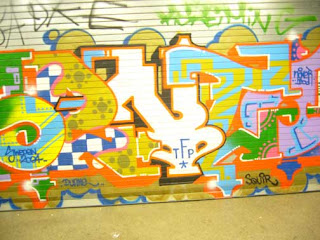 Tom, being Tom, had to point out that the reflection in the Rock n Roll type is upside down. (Americans are so nit picky) 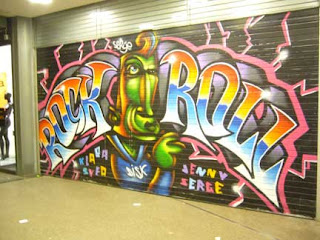 All in all it was a great trip. We met a bunch of cool people at Jay's work, drank tons of great Euro beer, drank tons of uber good coffee, saw lots of cool art, and got to catch up with old friends. We also found out, from our new Swedish friend Bob, that Swedes do not even have a name for umlauts (rock dots for you metal fans). They're acknowledged for the sound they give a letter, but don't really have a name. Bob is full of Swedish tid bits, as well as very knowledgeable about zombies. Anyway, that's the short rundown of the trip. 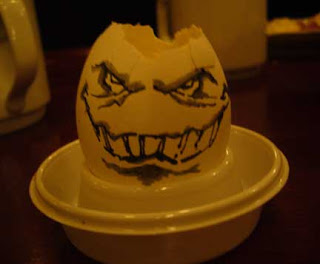 Evil egg says: Don't invite nice people into your house that want to use the bathroom. They might be vampires.
Posted by Augie Pagan at 12:30 PM No comments: Links to this post