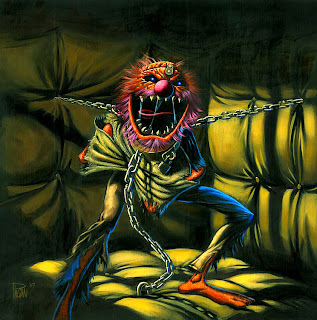 Here are some shots of the piece I did for the Muppet Rawk show that went down last night. If you didn't know already, the theme was to take an album cover of your choice, and replace it with muppets. I'm a huge Grover fan, and was pretty hell bent on doing a painting of, who I think, is one of the most underrated comical geniuses of our time. I thought, cool, I'll do Grover in place of the Eddie character from Iron Maiden's Piece of Mind cover. Done.
Not quite. 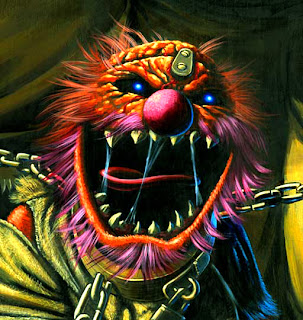 When I flew out for my art show at Keith's tattoo shop over the summer, I was telling him about the Muppet Rawk show, and the idea I had for the cover I wanted to paint. Immediately Keith was like, "No man, it has to be Animal!" As he was going into more detail about it, I started to get a mental image of it right away. I couldn't argue with the guy. He was right on all points. That cover was tailor made for Animal. Sorry Grover. Your time will come. 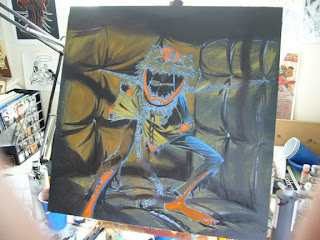 The pencils for this were pretty loose. No need to get detailed, because the thought process was already kind of done by the original artist that did the cover. Derek Riggs. The shading and palette work is already figured out, all that needed to be done is add Animal. Easier said than done, but still fun to execute. 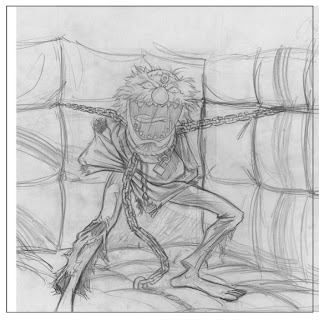 I know it's hard to find an 80's album cover that doesn't have chains in it, but I'm telling you right now, no more paintings with chains for a long time. I didn't realize how much detail went into the original cover until I started really picking it apart. Derek Riggs is a madman. I left out half the detail he put in. Every link in the original was totally rendered out and had a secondary reflective light source. Yeah, real good idea Keith. Thanks. Ha!

Dude, print trade right away!!!
You should paint all my ideas!!!LOL!!
K

Cant believe you pulled this out after telling me when you started it...DYNAMO!

wow this sure turned out awesome. WIsh I could of made it to the show.

Dude, you are a FREAK. I can't stop thinking about this painting. Too bad it's sold. I may pay you to video tape your next painting. Expect an hour long phone call on how you did this...Where's my print Mackie??? I'll send yours out next week.
KK

Ha ha, awesome man! Your stuff is awesome, it was awesome at Humongous, and it's only gotten better. I used to work with you there, you might not remember.

Ha! You might not want to video tape me painting Keith. I paint in the raw.

one of thebest work i have seen, and hand painted, great job indeed.