I never really think anyone pays attention to the blog until someone I haven't seen in awhile comes up and says, "Hey, what's up with the blog posts?!" Well, apologies for those that have been checking in and not getting their visual dose of art stimuli. After the last post in October, it seems it's been a flurry of holiday madness, art deadlines, family visits out of state, and the slow realization that it's already 2008 (yikes).

With that being said, let's get to it. The above piece was for practice. After getting back from the Brushes Needles and Burnouts show in October, I was super psyched to try my hand at some more pin striping. Still have a long way to go. Trying to get a handle on pin striping is kind of like the first time you picked up a brush and tried to ink a comic page. It's kind of like trying to learn how to ride a different kind of bike all over again. Just need to keep practicing. 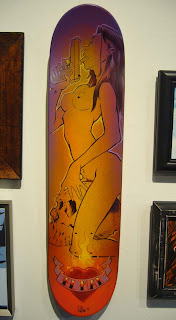 This next piece was a skate deck I did for a local Seattle art show last month. The BLVD Gallery hosted a Good vs Evil show. The turn out for the show was huge. Lots of local talent was hanging on the walls. I meant to get more shots from the opening night, but there were so many people that showed up that I hadn't seen in so long, that it turned into a night of catching up with people more than anything. Good times.

Here are a few roughs for the deck. Above is a super rough idea of what I had in mind. Below, I think I enlarged the rough sketch a bit to tighten things up and get a feel for the skate deck format.

The above rough was then blown up a bit more, and then tightened up again until things started looking right. I was still working things out at this stage and trying to get the image to fit on the deck. I think the type was even drawn on another piece of tracing paper and then transferred after I started painting the thing.

I unfortunately didn't have time to scan the deck before dropping it off, so these crappy photos will have to do for now. It was fun painting in a different format. I still have some blank decks laying around, so maybe there will be a chance to do more in the future. 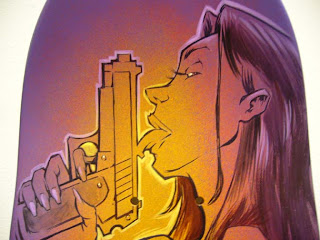 Anyway, sorry for not giving a heads up on here about the show. The holiday/deadline madness got the best of me. I think the show might still be up for the month of January, so if you happen to be downtown, you should stop by The BLVD and check out the show. 2008 looks to be filling up with some small group shows here and there, so check back for updates, I won't slack this time around. Hope everyone had a good Xmas/New Year's. Raise your glasses suckas! Here's to 2008! (clink!)
Posted by Augie Pagan at 1:48 AM 3 comments: Links to this post