New Work at the Hive 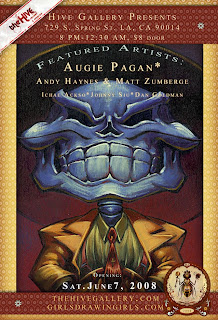 So, here's my excuse for not posting as much as I should have been lately. The dog didn't eat my homework. Nope. I've been getting some new pieces ready for a show at the Hive Gallery in LA next weekend. I'll have some new stuff to show as well as a few other pieces you might have seen. There will be new prints available the night of the show too. 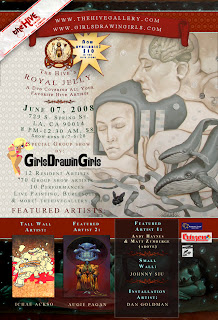 As you can see from the fliers, there's a ton of stuff to check out at the Hive. If you feel like taking in some art, come on out to the Hive next weekend. I'm dragging out as many people as I can that night, so I hope to see you there.
Posted by Augie Pagan at 10:06 AM No comments: Links to this post 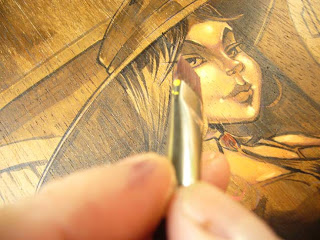 Since the last post, Emerald City Con has come and gone. If you didn't make it out to the show, it was pretty cool. Thanks to everyone that stopped by the table to catch up and check out the new prints. The highlight of the show for me was being able to meet the European artists that came all the way from Spain. Juan Gimenez, Alfonso Azpiri, Sanjulian, and Esteban Maroto. I can't begin to ramble off their combined resumes, because they've done it all. Everything from working on the original Heavy Metal movie and magazine, pulp covers, Conan comics, Vampirella comics, the list goes on. They've been around, seen it all, and it shows in their work. Very humbling to sift through their original works they brought out for the show.

The same weekend of the Emerald con, was also the same weekend of the KISS show that went down at Kustom Kulture Gallery. I was hoping to post the piece I did for the show, but I just realized that I didn't get to scan it before it got shipped off. You can check it out my painting on Kustom Kuture's Flickr account as well as all the other entries for the show. Keith told me that Ken Kelly himself had prints available and came out for the show too. That's worth the price of admission right there.

Sorry for the late post, but I've been getting some new pieces ready for an upcoming show in LA. I'll be hanging some new stuff at the Hive Gallery for their June show. Check back soon for all the juicy details. In the meantime, I'll just have to tease ya with the above pic.
Posted by Augie Pagan at 10:41 AM No comments: Links to this post

Hey everyone, it's that time of year again. Time to embrace your inner geek. That's right, time for another Emerald City Comic Con. I'll be at the show selling some art prints in artist's alley, so fell free to stop by and say hi. Check out the website for the list of guests and directions to the Washington convention center. Looks to be a fun show.

Hope to see you there.

-Aug
Posted by Augie Pagan at 9:47 PM 3 comments: Links to this post