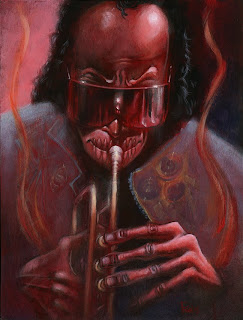 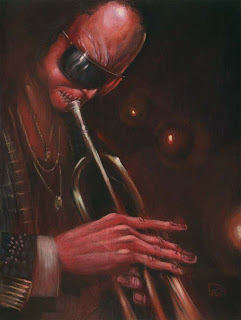 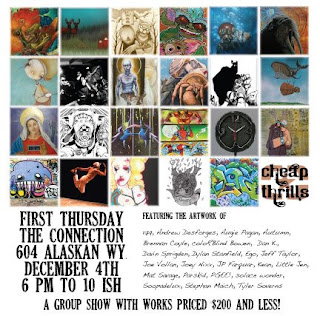 Seattle's Sno Con is having a group show for December's first Thursday art walk. There will be a bunch of great local Seattle artists in the show, so if you're in the Pioneer Square area, go check it out! For any inquiries on art purchases, you can get contact info on the Alaskan Way store here.
Posted by Augie Pagan at 12:13 PM No comments: Links to this post 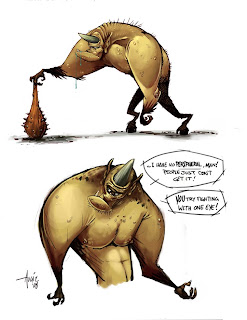 Posted by Augie Pagan at 2:53 PM 4 comments: Links to this post 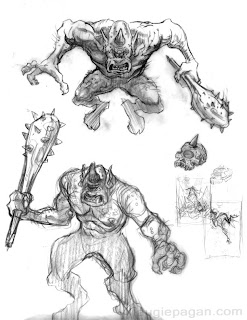 Just finished a new piece for Solid Gallery One's Chupacabra group show. It's a group show inspired by devils, weird animals & mythical creatures. Since I already did my version of a Chupacabra I decided to do some monsters I grew up with as a kid. You really can't go wrong with Ray Harryhausen's Cyclops. Gotta love those old Sinbad movies. 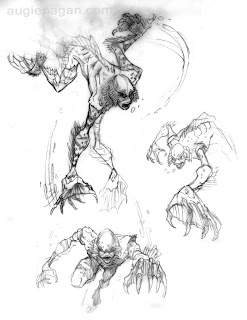 You also can't go wrong with the Creature from the Black Lagoon. That has to be one of the best creature designs that still holds up today, in my opinion. I thought I would do two separate paintings with these monsters, but time just wasn't on my side. Instead, I just had to figure out a way to have them both in there. 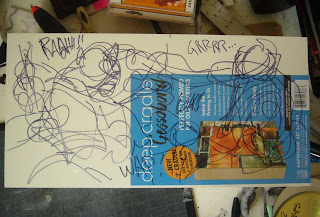 Sometimes I'll a do a reeeally loose sketch on the shrink wrap that the gesso board comes in just to get a sense of the scale, shapes and proportions. 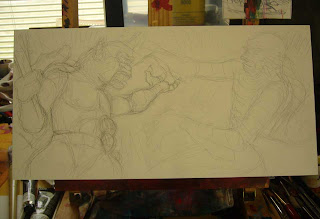 Since I already own these two figures, my reference was covered. Knowing that, I went straight to the board and started sketching things out. 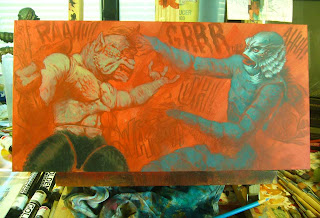 Above is a shot of the painting in the early stages. You can see fish face lurking in the background. Great model that guy. 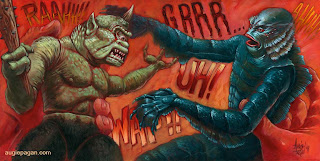 The idea for the painting just came out of thinking about Sunday afternoons watching monster movies and playing with action figures and acting out your own movies with your toys. I can guarantee that if you put some toys in front of a kid, the first thing they will do is mash them together with their own sound FX and make them fight. I still do it to this day (don't tell anyone).

Anyway, the gesso board had a cool wide screen feel to it too, so it worked out perfect. The show is up until December, so if you're in the area, check it out! 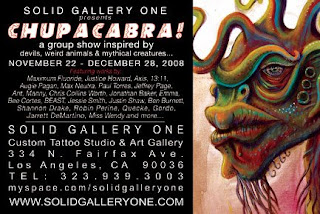 Posted by Augie Pagan at 9:32 PM No comments: Links to this post 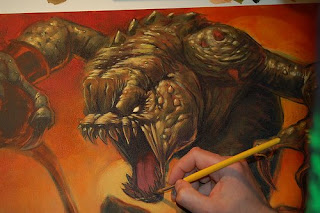 Ok, so I still have to catch up on some art shows that went down last month. A week after the Kruger workshop in Germany was the Kustom Kulture Gallery "Brushes Needles and Burnouts" show. It's the shop's annual two day blow out show that has artists of all backgrounds (tattoo artists, pin stripers, air brush artists, illustrators, graffiti artists) come out from near and far to exhibit art and make pretty pictures. 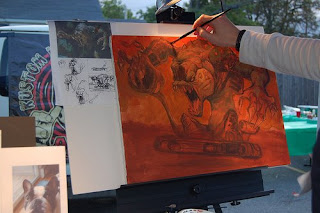 I was asked to do some painting at the show and figured that a Rancor riding a Land Speeder would be something that could fill up the day(s). (...and yes, that is a Death Star shift knob.) 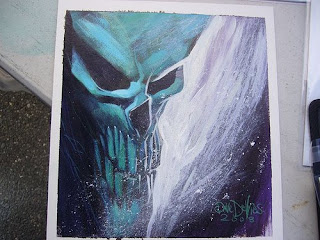 I was also very fortunate to be painting next to the very talented Mr. Dave DeVries. It was very cool to watch the man work and check out his process. While I slaved away on the Rancor, Dave whipped out three paintings the first day. 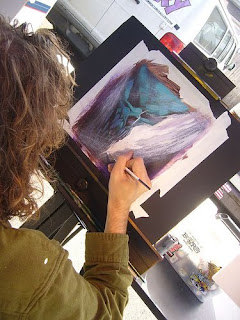 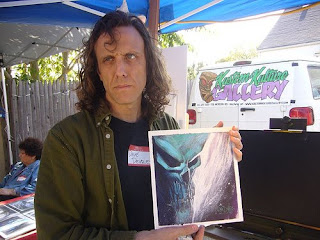 The man is super talented and gracious as hell. If you get a chance, check out his website here.
Also, if you happen to be out near Baldwin NY next month, you might want to look into his painting class that he'll be doing at the Kustom Kulture Tattoo shop. 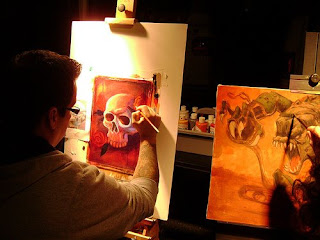 In between running the show, Kustom Kulture owner, Keith Ciaramello would sit down and do some painting. You can see way more pics of the show and the art in the show on his shop's Flickr account. 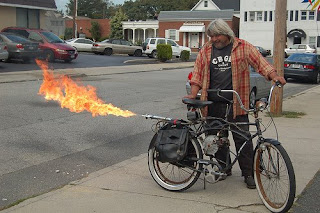 I had to use some of their photos on here (thanks guys) because I don't think I got too many good ones. I was on Rancor duty most of the time and only got a hand full, so I missed the good shots like the guy above. Dudes like that just make you want to think out of the box a little more. Just make sure small children aren't around when you do.
Posted by Augie Pagan at 11:02 PM 1 comment: Links to this post 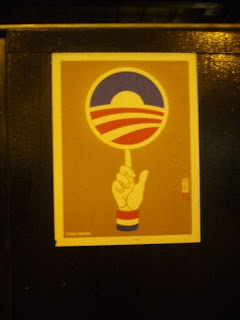 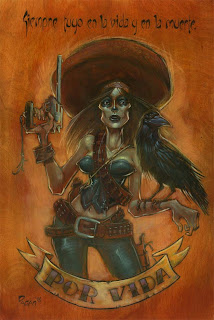 Halloween may be over but there are still Day of the Dead events going on tonight. Did this latest piece for a Day of the Dead show that's happening out in Columbus Ohio.

Used acrylics on wood for this one. I finally got a chance to use Golden's new line of Open Acrylics. They dry a lot slower without having to put any slow dry product in the paint. Probably the closest to feeling like oil paints that you're going to get.

The saying on the top of the painting translates to: "Always yours in life and in death." 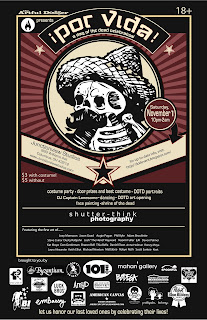 Posted by Augie Pagan at 11:37 AM 2 comments: Links to this post