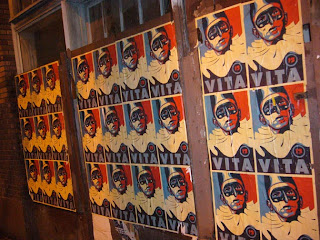 Before I post the latest piece, I thought I'd catch up on some 2008 posts I've been putting off and just squeeze them into this one.

Around election time last year, I was asked by local coffee makers Cafe Vita, to do the art for one their latest street campaigns. They wanted their punchinello clown mascot drawn up to look like the now iconic Barack HOPE poster that Shepard Fairey did. It was fun to do some vector art again. I think some of the posters might still be plastered up around town. They weren't trying to make fun of Obama or anything, so don't get all bent out of shape. Besides, Obama is so laid back, that even in the light of facing a trillion dollar deficit that needs to be fixed, he's still comes off as one smooth operator. 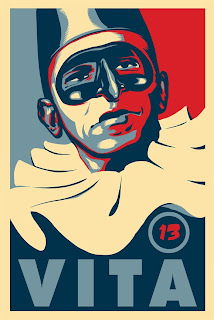 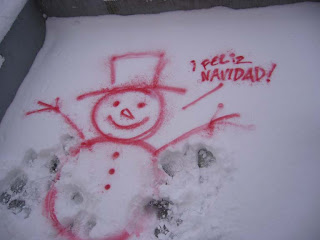 If you aren't from Seattle, you might have heard about all the snow we got last month. Man did that suck. The above pic is the extent of my snow man skills. Mexi-Snow-Man says "Feliz Navidad" to all the other Latino snow people that were stuck in the Seattle snow. This photo was taken right after the first snow stopped. It came down two more times later that week and seemed like it wouldn't stop. If it wasn't so damn cold, I would have snow tagged the rest of the neighborhood. 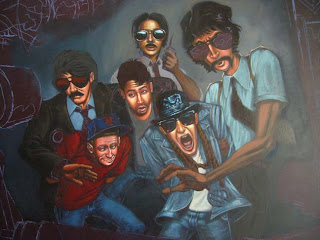 I spent most of the snow days huddled next to the heater finishing this painting for Gallery 1988's Beastie Boy show that's going on this Thursday. Unfortunately, This in progress picture of the painting was the only one I took. More on the show in the next post. 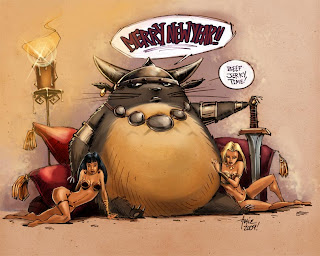 I was lucky enough that the snow didn't stop me from getting out of town for X-mas. I went down to the Bay Area to hang out with family and friends, and enjoyed the warm december sun the whole time. Also went to San Francisco's Cartoon Art Museum and checked out their latest exhibits. When I was there, they had original art on display from the Totoro Forest Project Charity Auciton, as well as a very cool retrospective on comic book artist Gene Colan. Both were very cool exhibits and worth checking out if your in the area.

Well, that about catches everything up. I'll post a pic of the finished Beastie painting soon. Hope everyone had a great holiday/New Year!