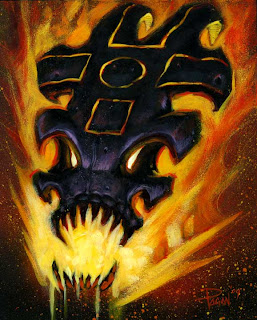 Time to catch up on some group shows. This piece was done for the Hive Gallery in LA. It's a huge 4 year anniversary show.

For the group show, they asked the artists to come up with characters for a fictitious world that's broken up into different lands. I came across a 15th century symbol called a restoration cross, or a pierced cross

. It's identical to a symbol used for a Mayan fire god. Kind of made sense to incorporate it in there somehow. Since those Mayans seem to know all about the end of the world, maybe we can expect some of their fire gods to come our way in 2012.