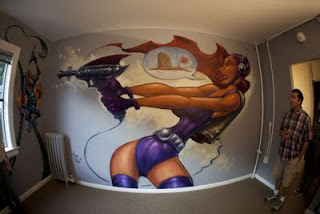 Just wanted to post some last minute pics from the Seattle City Hostel opening. Scott Moore from Bellevue Fine Art Reproduction, had an awesome fish eye lens on his camera. Here are a few pics he took in my room. 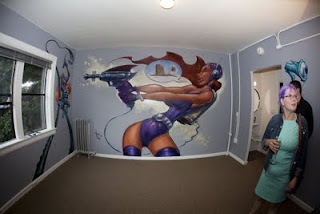 Scott has a bunch of great pics on his Flickr site of the other rooms. You can check those out by clicking here.

Another guy that came through the room was Michael Rogers from Seattle Food Tours. Michael also has a bunch of shots of the other rooms on his Flickr page too. He was the guy that dropped all the knowledge about Belltown's Movie Row past (see last post). There's also an online article in the Seattle Times about the project at the Hostel as well as some history of the building. 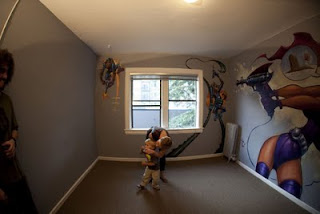 I think this kid's mom is secretly whispering to him, "Look honey. That flaky artist was too lazy to paint that wall. Go kick him in the shin!" That wall actually has two back to back bunk beads that go there. If my schedule allowed me more than five days to work in the room, there would definitely be more tentacles and monkeys up there. Then we would see who kicks who in the shin.


These last shots, below, are from the guy that painted the room directly across from mine. I had to stop painting for a few minutes and take a few of Zak while he was working. 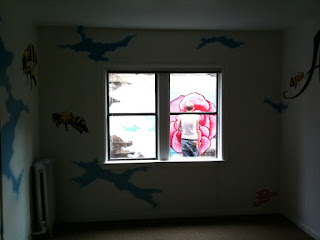 Zak had the genius idea of continuing his cloud, sky, and bee pattern that he painted in his room, and painted it on the wall of the building directly outside of his window. 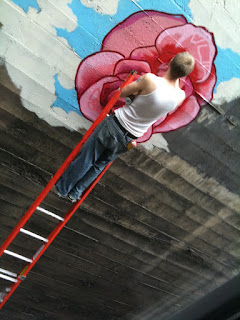 Genius. Oh yeah, he's two floors up, if you couldn't tell. Inside his room he also has a similar flower on one of the walls. 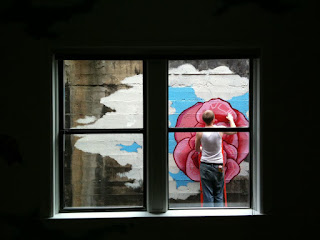 Anyway, hope you enjoy the pics. Scott and Michael, thanks for the links and pictures.
Posted by Augie Pagan at 4:46 PM

Sorry, Anonymous. I ran out of purple. Besides, I thought it was obvious that she wasn't wearing a bra.

Word dawg. Rambles on like his work is great. Painting big=big mistakes. Should stick to smaller scale stuff.

why do haters have so much free time?

I give up, why do they?Is that a riddle or joke?

I give up, why do they?Is that a riddle or joke?