Under the Influence: He-Man and the Masters of the Universe 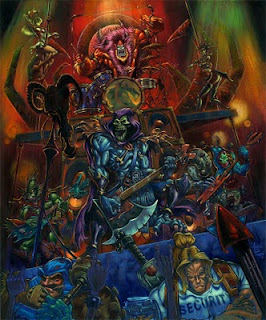 Just finished up a new piece for Gallery 1988's, He-Man and the Masters of the Universe show. Thinking back to when these first came out, I remember still being into my Star Wars toys, and both my brothers were into the He-Man stuff. I would still check out their new He-Man toys, but by that time, toys in general were losing interest for me (but not comics), in lieu of girls.
Either way, it doesn't matter because my dad ended up selling all our stuff at the flea market (no, I'm not bitter). Too bad. Those He-Man toys are going for some bucks these days. By the way, me and my bros never saw a dime from those flea market sales.
Anyway, the He-Man toys were pretty detailed for the time that they came out. looking back on those designs, they were kind of like, 'G' rated barbarians meets Heavy Metal. That's pretty much where the idea for the painting came from. 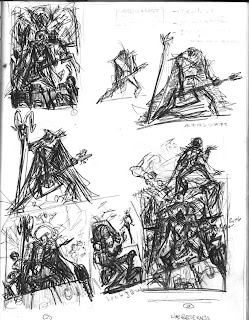 Here are a bunch of scribbles of the process before I got to the painting stage. Above, is a page of thumbnails, trying to figure out a rough idea and layout at this point. 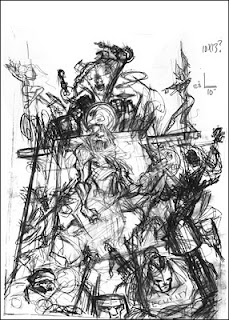 This one is a reeeeeally rough sketch of the layout I liked, at a bigger size. 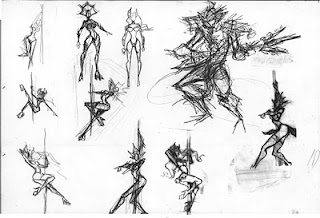 After that I sketched out the characters individually at an even tighter stage. Those sketches were then scanned and put together in photoshop. 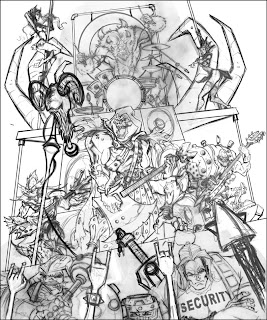 Once that was all done, it was printed out, and the pencils were transferred to a piece of wood. If I had to guess it was a couple of days of sketches and around a week or so of painting. I really wish I could check out the show. There are already some great pieces from the other artists on G1988's blog. The opening night for the show is this Friday, the 8th, and continues until the 29th.
Here are the painting specs:
Title: "Skeletor and the Bones Brigade Live at Eternia"
Medium: Acrylics on Wood
Size: 20"x 24"
While looking on Ebay, I also came across this cool MOTU resin kit. Some pretty hard core fans out there. Anyway, keep an eye out on the G1988 blog. I'm sure they'll have all the pieces up there soon.
Posted by Augie Pagan at 5:27 PM 8 comments: Links to this post