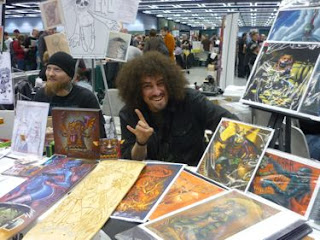 Just now getting around to digging up some photos from Seattle's Comic Con, last weekend. It was a super busy weekend, and I can't believe how much bigger the show keeps getting each year. Saw lots of old and new faces, and had a blast hanging with the art crew. The best part, local artist Ego and I shared a table and didn't kill each other. Good times. Here are some pics from some of the costumed con fans that were walking the floor. 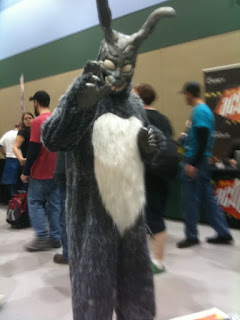 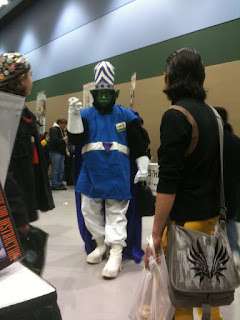 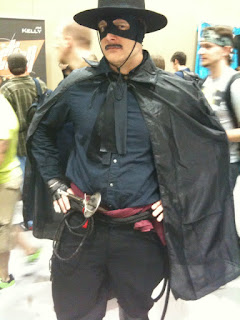 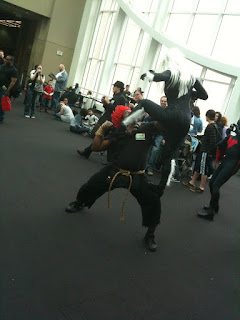 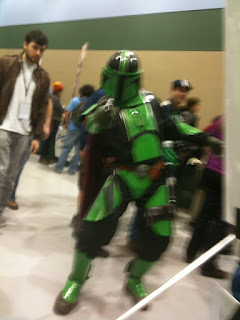 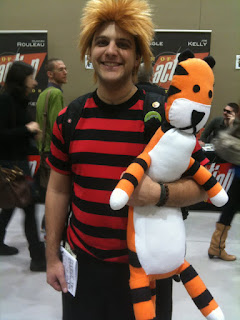 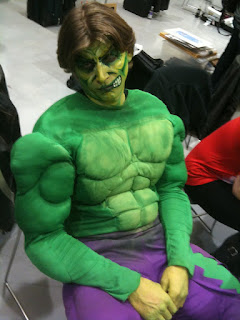 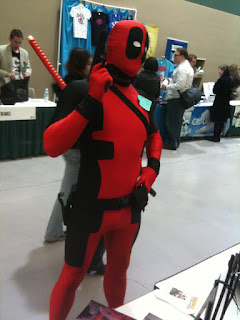 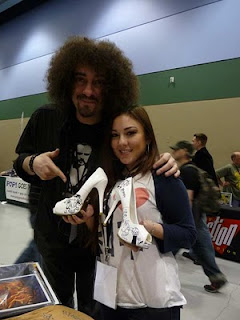 Here's an art request that I thought was pretty cool. California native, Hilary came by the table and asked Ego and myself to draw some art on her shoes. Ego skull head on one shoe, and Frankenskully Aug-head on the other. Can't wait to see the finished product. 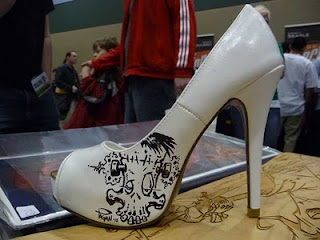 Anyway, the show was a blast and I wish I had more time to check out the show, but most of the time was spent behind the table dorking out on art and catching up with old friends. Thanks to everyone that took the time to stop by the table and check things out. If you want to see more photos from the show, the Seattle Weekly has some cool pics online. The Seattle Pi also has some great behind the scenes photos from the costume show. Also, check out Karin's photos at her Stumpytown site as well as Ed and Memo's con pics.
See everyone next year at the three day Emerald con! THREE!?!?!?!?
p.s. -If the guy that came by the table is reading this, that took a picture with me and his Lou Ferrigno signed fire fighter hat, I'd love to get a copy from you.
p.s.s -To the guy that came by the table asking if there was a High Times booth at the comic con, sorry you couldn't find one. It looked like you found one somewhere else anyway.
p.s.s.s. -To the guy that was dressed as Enlsaved Princess Leia, I wish you NEVER walked by my table. You have scarred my retinal nerves forever.
Posted by Augie Pagan at 10:50 AM 2 comments: Links to this post

This weekend, March 13th and 14th, is the 8th annual Emerald City Comic Con. I'll be hanging in artist alley at table C-12 selling prints and original art along with local artist Ego. If you're in the area stop by and say hello.
Saturday night, there will also be an artist reception spotlighting the Sidekicks and Henchman show at Flatcolor gallery, so don't forget to check that out (as well as Dave Mac Dowell's art and yours truly) before that show comes down. 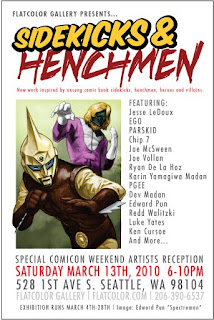 On another quick note, if you remember February's Thought Processor show, you can now download your favorite cut out design from that show if you go to Phoneticontrol's site and click on the Seattle link. If you would like to down load the design below, just click here. 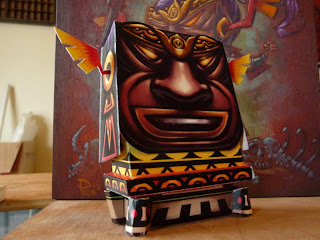 Anyway, that's the lowdown for now. Hope to see some of you at the show this weekend!

Posted by Augie Pagan at 4:13 AM No comments: Links to this post 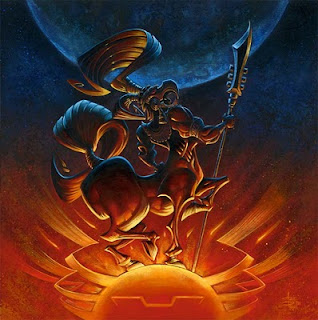 -"Horse Warrior"/Acrylic on Wood/18" x 18"
Here are the rest of the pieces that will up at Flatcolor gallery this month. Had some time to dig up a bunch in progress shots from various pieces from the show. Maybe it will give some insight into thought process. 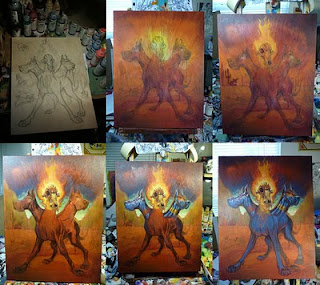 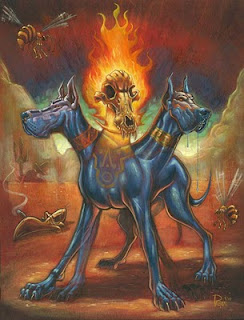 -"Three Dog Night on the Mexican Border"/
Acrylic on Wood/
14" x 18"
What sparked a lot of the ideas for this show was a viewing of a lot of old 8mm footage that my mom recently archived and put on a DVD. Most of it was family footage from around the age of 4-5. One section of film that unlocked a bunch of old kid memories was a road trip that we took to Mexico to see my grandpa. Bay Area-> Iowa-> Grand Canyon-> then finally down to a few towns in Mexico-> Irapuapo->Peublo Nuevo->Acapulco. All of us crammed in a pick up truck with our huge Great Dane in the camper. That dog could look so scary that they took one look at her and let us pass through the border with no questions. Simpler times. 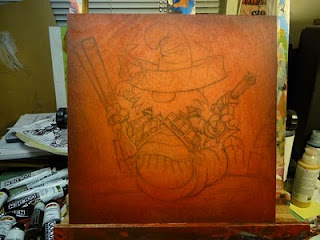 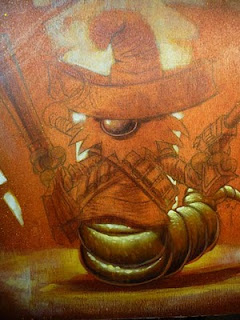 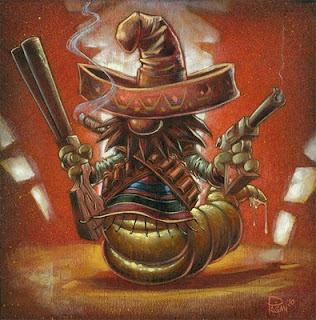 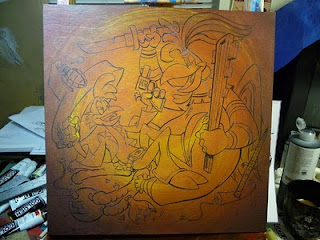 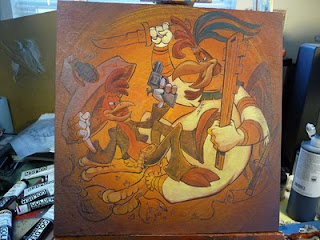 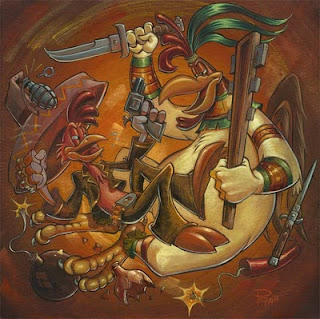 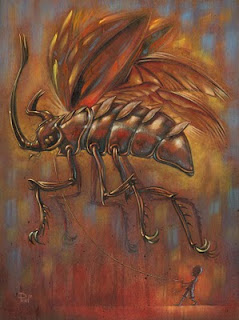 -"Custom Kite"/Acrylic on Panel/12"x16"
Another thing that stuck out in the 8mm films was footage of me and my mom hanging out
with the neighborhood kids in one of the smaller towns in Mexico. When you have no dough, you have to be resourceful. Tying a string to those huge flying beetles to pass the time was the norm. Good times. 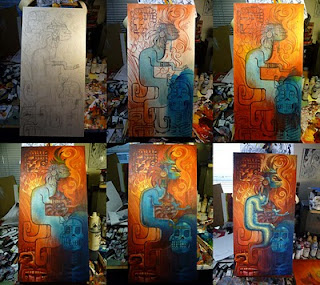 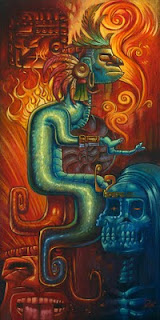 -"Homage to a Mayan Glyph"/Acrylic on Wood/12"x24"
The image above is based on a Mayan drawing I came across while doing research. The main guy running up the middle was from the Mayan design, and I added the rest by trying to come up with different images that kind of represent the different elements. Aztec and Mayan designs already have a really cool stylized look to them. I just wanted to see if I could push it a little more. 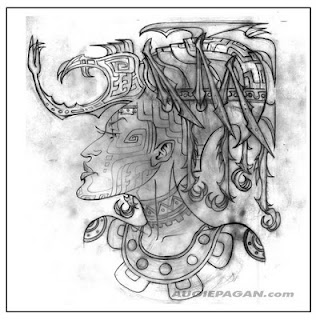 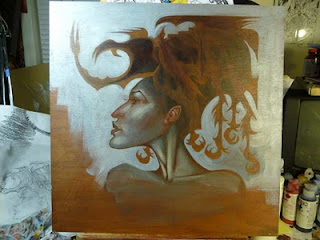 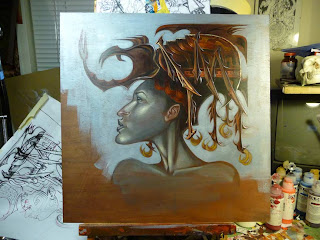 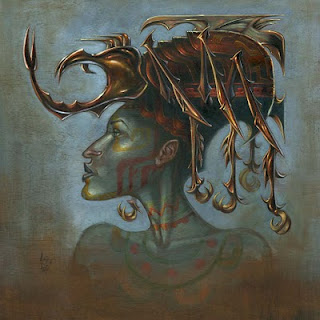 -"Beetle Queen"/Acrylic on Wood/17"x17"
Anyway, that's what I've been doing in my spare time. Super excited to check out the rest of the show tonight. Check out the previous post or go here for details on where and when the show starts. Hope to see some of you there. For any purchase inquiries, you can contact Flatcolor gallery here.
Posted by Augie Pagan at 1:07 AM 4 comments: Links to this post