It's that time of year again for Gallery 1988's big Crazy 4 Cult show. I'm super excited to be part of this year's show. If you're unfamiliar with Gallery 1988's Crazy 4 Cult show, it's basically a huge group show and the theme is cult movies.
For this year's show I wanted to try a movie that hasn't been touched on in the show, and one of my favorite flicks has to be the Usual Suspects. If you've never seen it, go check it out. The above painting is a classic scene from the movie where all the characters are in a police line up. To put a twist on that scene, I decided to make a reference to past movies that some of the actors have been in. There are about six, possibly seven (you can argue that one can be counted twice) movie references that are called out. There's also a reference to a line in the movie. I would normally write all the references out, but after the long story in the last post, I feel like I should keep this one short. If you feel like guessing, leave some comments.
Anyway, if you're in or around the LA area this Friday, go check out the show. Gallery 1988 always puts on a really fun opening night, and you'll see tons of great art that will melt your retinas. If you can't make it out there, check their blog this week to see updates on all the art. Info for the gallery is in the below flier.
For the curious, this image clocked in at 18"x36". Still using acrylics. This one is on masonite. Stay tuned for more updates on some local shows that are going down this month. 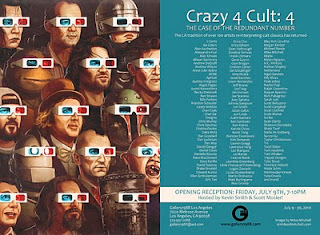 P.S. I think there should be a national Finster day where everybody talks like Benicio's character for the whole day. You'll win every argument because nobody will understand you. "He'll flip ya! Flip you for real!"
Posted by Augie Pagan at 10:44 AM

That Poster is great!!!