Just a quick update on what's coming up in the next few weeks. Bunch of group shows next month, as well as the Emerald City Comic Con.
March 2nd will be the 2nd Sidekicks and Henchmen group show at Flatcolor Gallery.
March 4-6th will be Emerald Con, and that's not a typo. This year will be a three day show, so get those costumes ready, you know who you are. I'll be in artist alley selling prints and doing sketches. (table H-16) As it gets closer, I'll post more info, and hopefully, will know what new prints I'll be selling.
On March 11th, there will be two group shows up in Greenwood. Bots vs Beasts at Urban light Studios, and Heroes, Vixens, and Villains at Tasty. Both of these shows are in the same hood, so come out and make a night of it.
Anyway, there's your heads up. More deets below, and keep an eye out for more updates and art for these shows in the following weeks. 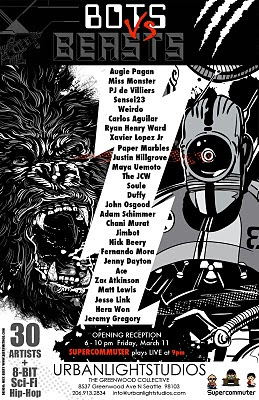 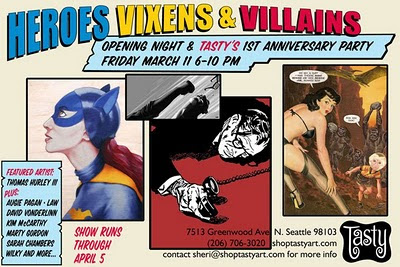