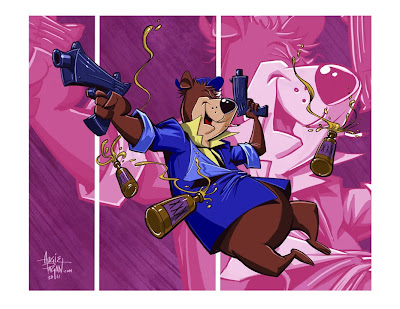 This was done for Rain City Brew's Beer as Art event. Artists did their take on beer titles. Mine was "Smokey BBQ-Bebop." That just seemed to easily translate into a Yogi Bear/Cowboy Bebop mash-up.
Posted by Augie Pagan at 9:38 AM No comments: Links to this post 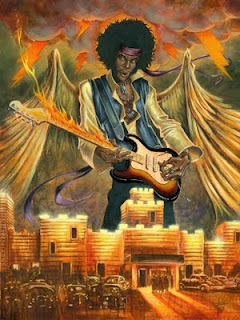 Currently on exhibit at The Scenic Drive on Capitol Hill is the "i miss you" show. From the website- "Local artists reflect on the buildings in Seattle they miss through visual, oral, and written histories. Come share your story."

There are way too many great buildings in Seattle that have come and gone. The Spanish Castle was a famous dance hall/club built in the 1930's that had tons of great acts come through there up until the late 60's. Among those acts was a young Jimi Hendrix, who later wrote a song about it called Spanish Castle Magic. The Sonics, and the Wailers were among the many local bands that also came through there . You can read a history of the building and the acts that came through there here.

Other buildings in the exhibit are:
THE BELMONT-KINGDOME-TWIN TEEPEES-619 BUILDING- RAINIER COLD STORAGE-1502 BUILDING