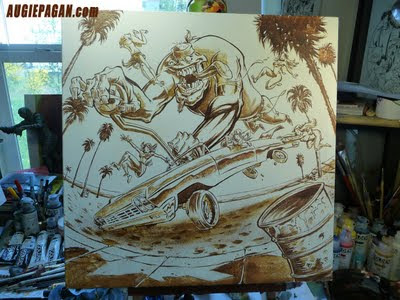 I didn't take too many step-by-step shots of the paintings in this month's Weirdsville show, but I found these pics, (Actually, I finally found my camera.) You can see the final one a couple of posts back, or click here for the finished piece. 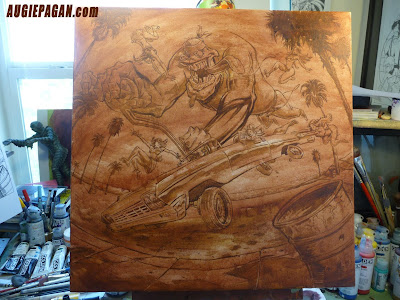 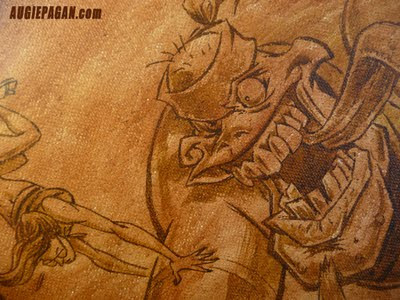 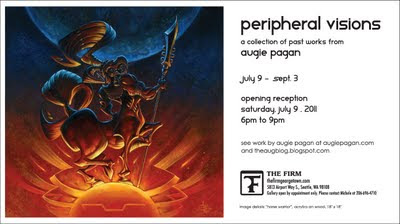 Going to be showing a collection of past work at the Firm, down in Georgetown next Saturday. If you're coming down to the neighborhood for the Art Attack, stop on by, have a drink, and dork out on some art.

I'll also have some prints on hand as well. I'm not fully stocked, but I'll bring what I have. If there's a print you saw at a con, or on the blog, give me a heads up. If I get enough requests for a certain image, even if it hasn't been a print yet, I'll do my best to get those made up before the show. Just hit me up here augiejp@gmail.com with the subject  line: PRINTS!

On a personal note,  showing my work in Georgetown means a lot to me. I was between places when I showed up in Georgetown in 2000, when nothing was down there. Over the next few years, artists that were kicked out from Pioneer Square, post dot com implosion, and artists from as far back as the east coast, were showing up, and planting roots. At that time, I was ready to move to another city, but over the next few years, I was exposed to tons of art,(not just drawing and painting) and tons of new friends.


More importantly, there was a big D.I.Y. vibe, going on in the neighborhood that got my creative energy flowing. That same vibe not only kicked me in the ass, but it is also a big foundation for the businesses and the people that are there now. I started getting serious about my painting and my art back in 2006, when I did the Oz show at All City coffee's old Pioneer Square joint. A lot of the art in this show was created in the old Gem studio, when All City coffee, and the 9lb Hammer were still being built. After that, I made more art in the Corson building, and yet even more art in another studio above Art Core, on Airport way.


I was reading the old post from that Oz show, and there's a long rant (like this one) where I go on about Seattle's not so thriving art scene (at the time), compared to other cities, and why more people don't put on more art events. Maybe that was my own naive point of view at the time, but that's what it felt like. Well, five years later, I can honestly say, that this is not the case anymore. Not only are there more art walks to shake a stick at these days, in multiple neighborhoods, but everyone around me, myself included, have taken the initiative, and put on some great art events. You know that to be true if you've been to any of the Art Jams we put on in Georgetown, for example. Anyway, if someone says there isn't an art scene in Seattle, there not looking in the right places. If you still think there isn't a scene, make your own.
D.I.Y.

I just decided not to dig up an old bio for this show, or write a new one. I just wrote it.

Hope to see you there!

p.s. come back to this blog in 5 years for another long rant! Stay thirsty my friends.

Girl With the Ghidorah Tattoo 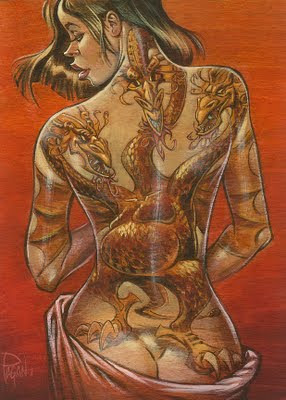 New piece for Cade Gallery's Monster Kaiju group show.
If you live in the area, go check it out! 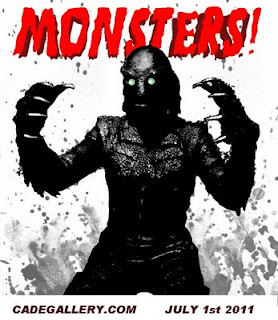 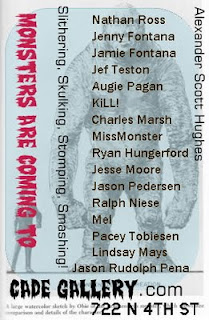 Title: "Girl With the Ghidorah Tattoo"
Size: 9"x12"
Medium: Acrylics on Wood
Posted by Augie Pagan at 4:03 PM 2 comments: Links to this post

Last of the Weirdsville Art 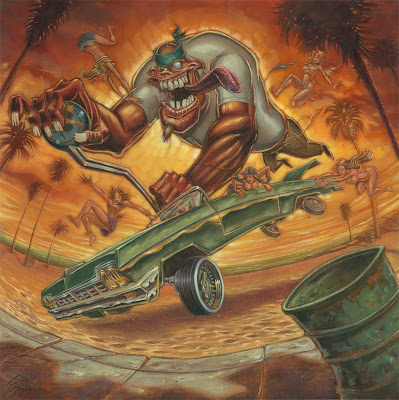 -Title: "El Grito Loco"
-Size: "20"x 20"
-Medium: Acrylics on canvas
Here are the last three pieces that were done for the Weirdsville show at Tasty. The show is up until July 5th, so stop on by if you're in the 'hood. You can also purchase prints of the Rancor Speeder painting (18" x 24", with a 2" border) through Tasty. Thanks again for everyone that came out to the show. Always fun catching up with everyone. Lastly, check back for some updates for a couple of group shows coming up next month, including Gallery 1988's annual, Crazy 4 Cult show! 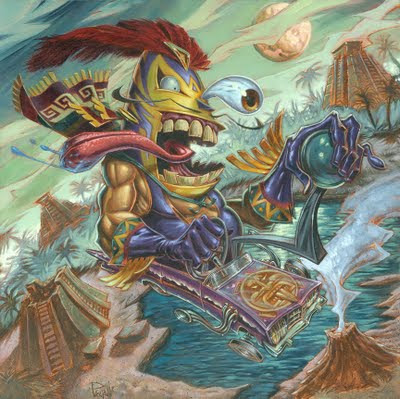 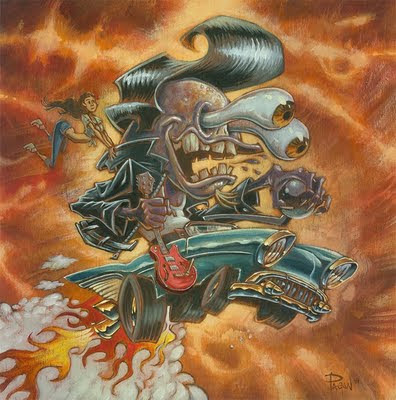 -Title: "Cloud Ornament"
-Size: 12"x 30"
-Medium: Acrylics on Canvas
Here are a few more pieces from the Weirdsville show. Since these latest pieces deal with car culture, I wanted to do some interpretations of my own style of hood ornaments. Would love to do more of these when time permits. 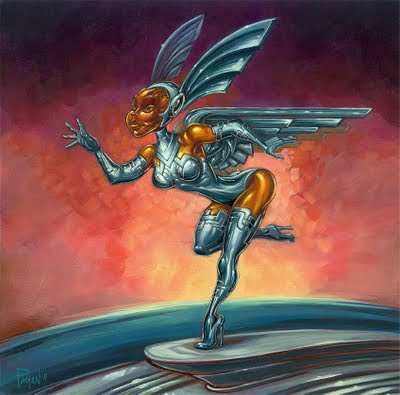 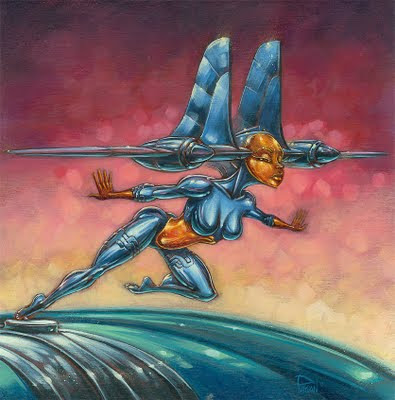 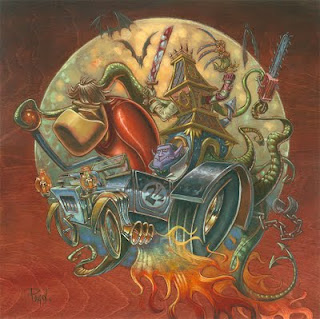 Here's a sneak peek at what to expect at Tasty's Weirdsville show this Friday night. If you don't recognize the characters "The Guesome Twosome", they're from an old Saturday morning cartoon called Wacky Races. The car designs were out there, and as much a character as the drivers. Here's the original cartoon intro, and here's an example of life imitating art. If you come out Friday, you can see six more new pieces, as well as prints of this piece. Stay tuned....

Recently did this skate deck for G1988's, upcoming Wet Hot American Summer group show. If you're in LA next Friday, definitely check it out. Also, check out Funny or Die for some previews from the show. 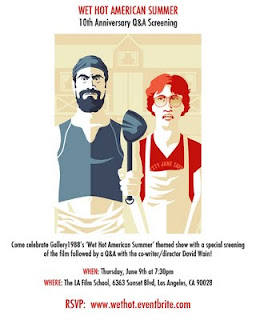 Speaking of upcoming art shows, I'll have some new pieces to show at local art boutique, Tasty, for Greenwood's 2nd Friday art walk, on the 10th of this month. Check back into the blog this week for some sneak peeks on the new pieces. While everyone is finally enjoying the Seattle sunshine, I'll be indoors painting.


Whaaaa! Art can be a cruel mistress, but at least I can paint in my drawers.
Posted by Augie Pagan at 9:17 AM 2 comments: Links to this post