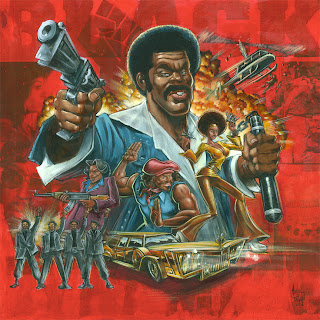 Here's the latest. It's for G1988's Adult Swim group show this Friday. Artists were asked to pick a show from the Adult Swim catalog. This is based on the Black Dynamite cartoon that's coming out this year, which is a cartoon based on the movie. (Just in case you didn't know) Anyway, check into G1988's blog in a few days for updates and images from the show.

Posted by Augie Pagan at 4:47 PM 2 comments: Links to this post 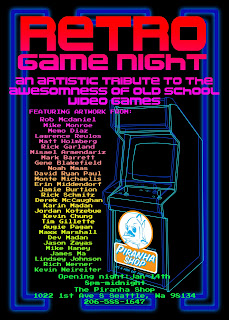 Feliz Ano Nuevo muchachos! 2011 is over. Dump, reboot, and download that 2012 app. Time to start anew! Hope everyone had a great holiday vacation. Now that we've gotten over those hangovers, and broken those New Year's resolutions, let's get on with it already.

Some cool group shows coming up this year. I'll post the info for those as soon as I am allowed to. What I can talk about are these current January shows I'm trying to wrap up paintings for right now. Next week, G1988 on Melrose will host an Adult Swim group show. Also, the following day here in Seattle, there will be a retro video game group show at the Piranha Shop. Same gallery that hosted the Muppet Rawk show, in case you were wondering.

Anyway, I will post some art images for those shows as soon as I can. Hope to see some of you at the retro game night show. Until then, I'll leave you with this profound Joseph Campbell excerpt. I'm not one to usually post stuff like this, but I'd like to do more writing this year. If I don't put it out there, I won't hold myself to it. Joseph Campbell is a pretty good place to start, and I think these words ring true today more than ever. That being said, go out, be your own hero, and do something creative while you're at it. ‎


"The hero is somebody whom you can lean on and who is going to rescue you; he is also an ideal. To live the heroic life is to live the individual adventure, really. One of the problems today is that with the enormous transformations in the forms of our lives, the models for life don't exist for us. In a traditional society - the agriculturally based city - there were relatively few life roles, and the models were there; there was a hero for each life role. But look at the past twenty years and what has come along in the way of new life possibilities and requirements. The hero-as-model is one thing we lack, so each one has to be his own hero and follow the path that’s no-path. It's a very interesting situation."
- Joseph Campbell (in conversation with Michael Toms), An Open Life, p. 109
Posted by Augie Pagan at 12:28 PM No comments: Links to this post