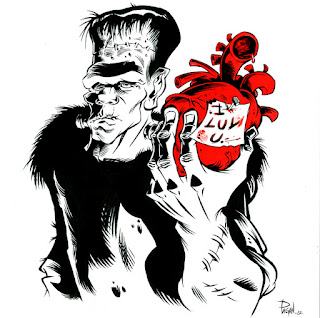 Super excited to be in the upcoming Jack Davis tribute show this Saturday at Fantagraphics in Georgetown. I drooled over this ad for Jack's 6ft tall Frankenstein poster as a kid. Don't know why I never pulled the trigger, but that image has always stuck with me.

That being said, it was all too appropriate to take a stab (no pun intended) at a Franky for this show. Instead of painting it as I normally would, I decided to do an ink pass instead. 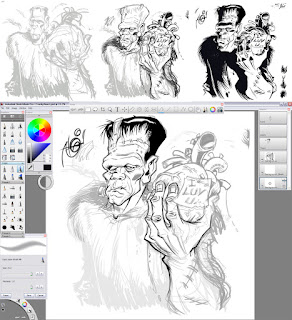 It's been awhile since I inked anything, so I "inked" it on the computer to get an idea of how I might approach the final piece. Been messing around with Sketchbook Pro lately and the drawing tools in there are amazing. After doing a tight penciled version in Sketchbook Pro, I transferred that to a piece of gesso board, and ended up inking that.

If you've never heard of Jack Davis, he's an amazing inker, among other things, and is most known for his MAD magazine art. Take some time and check out some of his other work, OR come down to the show this Saturday and pick up the new Jack Davis art book.

Anyway, that's the skinny. The show takes place during Georgetown's art walk, so there are plenty of open studios to check out that night. Do eeeeeet!