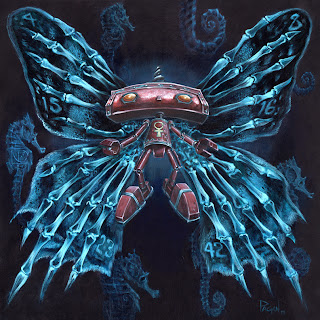 Super excited to be part of  G1988's latest group show. It's the first ever Bad Robot show. That means artists did their take on anything from JJ Abram's Bad Robot prod. catalogue. Also, this show is a benefit for a charity called The Mission Continues, helping veterans become community leaders. 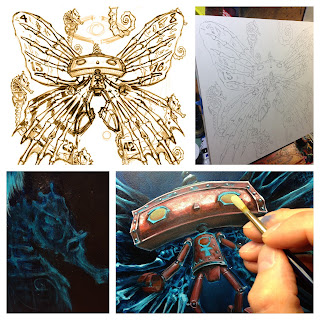 There were too many cool shows and movies to pick from for a painting, but in the end I went with the Bad Robot mascot mixed with some Fringe imagery, mixed with a little bit of LOST references.

The original idea was to do two paintings, both with black and white versions of the Bad Robot. I wanted to play on the good and evil aspects that were brought out in LOST. One would be a similar layout as this one above but a white Robot (good) and the other would be a black robot (evil) with the flower/dragon fly imagery behind him from Fringe. Each one would hold a different backgammon piece.( "Two players, two sides. One is light, one is dark." )

Anyway, there wasn't enough time for that, so we went with the original Bad Robot holding a backgammon piece. Is it a black or white piece? You decide.

You can check out some progress shots above. The show is tomorrow night. Should be a great turn out. Get the deets below. 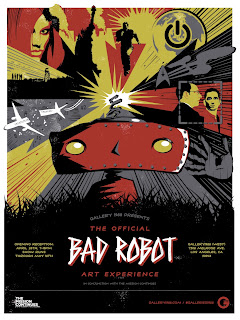 Posted by Augie Pagan at 9:47 AM No comments: Links to this post