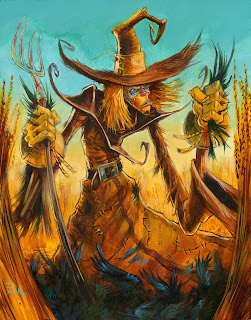 Here's a new piece for LTD gallery's latest group show, Pictures Worth a Thousand Words. The show is on display all this month, so check it out if you're in the neighborhood.

The image I chose to do is from  L. Frank Baum's book, the Wonderful Wizard of OZ. One of my favorite scenes from the book is when the Wicked Witch sends a murder of crows to kill our heroes. Of course the guy that thinks he doesn't have a brain, always seems to have a plan, and in this instance, the Scarecrow takes front and center to protect his friends. Here's the passage from chapter 12 of The Wonderful Wizard of Oz.

Now this same morning the Wicked Witch came to the door of her castle and looked out with her one eye that could see far off. She saw all her wolves lying dead, and the strangers still traveling through her country. This made her angrier than before, and she blew her silver whistle twice.
Straightway a great flock of wild crows came flying toward her, enough to darken the sky.
And the Wicked Witch said to the King Crow, "Fly at once to the strangers; peck out their eyes and tear them to pieces."
The wild crows flew in one great flock toward Dorothy and her companions. When the little girl saw them coming she was afraid.
But the Scarecrow said, "This is my battle, so lie down beside me and you will not be harmed."
So they all lay upon the ground except the Scarecrow, and he stood up and stretched out his arms. And when the crows saw him they were frightened, as these birds always are by scarecrows, and did not dare to come any nearer. But the King Crow said:
"It is only a stuffed man. I will peck his eyes out."
The King Crow flew at the Scarecrow, who caught it by the head and twisted its neck until it died. And then another crow flew at him, and the Scarecrow twisted its neck also. There were forty crows, and forty times the Scarecrow twisted a neck, until at last all were lying dead beside him. Then he called to his companions to rise, and again they went upon their journey. 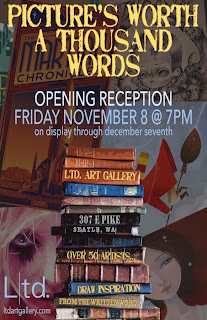 If you'd like to read the whole book online, here's a link:
http://www.pagebypagebooks.com/L_Frank_Baum/The_Wonderful_Wizard_of_Oz/index.html
Posted by Augie Pagan at 1:10 PM