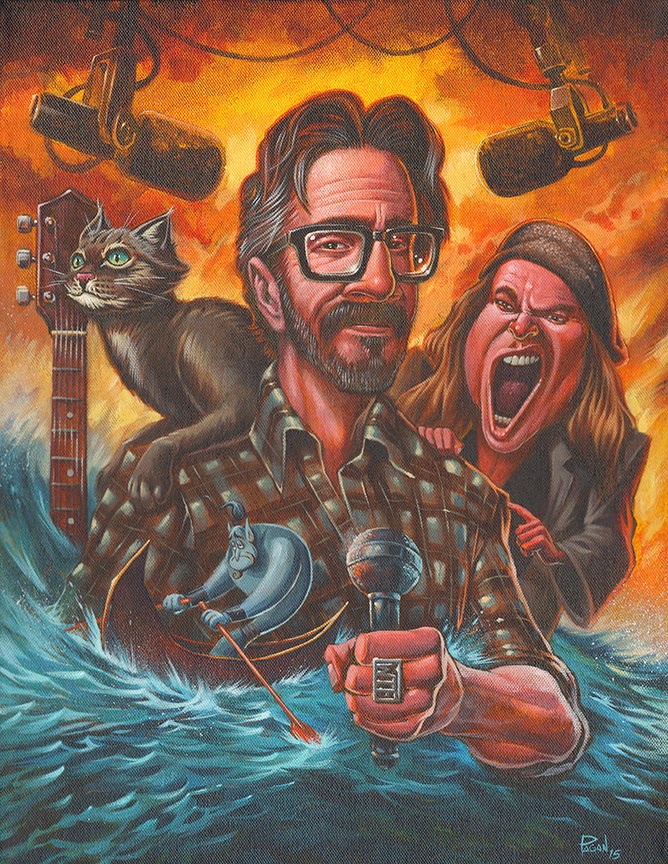 Super excited to be in Gallery 1988's 4th comedian art show. Here are some paintings from past shows that I did. There are so many past and present kicks ass comedians that it's always hard to pick just one. For this show I decided on Marc Maron. When your at home in your studio alone for hours on end, working on your art, it's either, loud music in the background, or maybe a podcast to keep you entertained into the wee hours of the morning. For me it's both (at the same time), and it's almost always, a comedian's podcast. Maron's honesty about his life, relationships and personal struggles are always great to listen to. His love for comedy, movies and music have brought some amazing interviews into his garage. Maron isn't afraid to ask the hard questions during his interviews and he isn't afraid to turn those insightful questions on himself. Whether it's picking apart the craft of comedy, music, or movies, he does a great job of trying to get to the core of every subject. If you haven't checked it out you should give it a listen.

Cats and his love of music and guitar playing are some obvious things Maron is passionate about. His stories from the 80's comedy club scene, and hanging out with Sam Kinison are legendary. The genie reference is a nod to Robin Williams, for a couple of reasons. Marc did an amazing interview with Robin that's worth tracking down online. He re released it after Robin's suicide. Here's Marc talking about it in an interview. Nobody knew then, or now, why someone like Robin would do what he did. That interview is a small window into his state of mind. The ripples of that suicide are still felt when you hear comedians or fans reminisce or try to dissect what happened. I did a tribute piece to Robin based on the painting in Good Will Hunting, that I thought would fit thematically into this piece. If you watch that scene now, it's pretty haunting. Anyway, that's why that's in the painting. We're all trying to tread water to some extent, in our own oceans, and we all deal with it in a different way. Marc's show is like a boat that will take you on those choppy waters and try to make sense of it all.
That's why I like listening to his podcast. Posted by Augie Pagan at 3:22 PM No comments: Links to this post 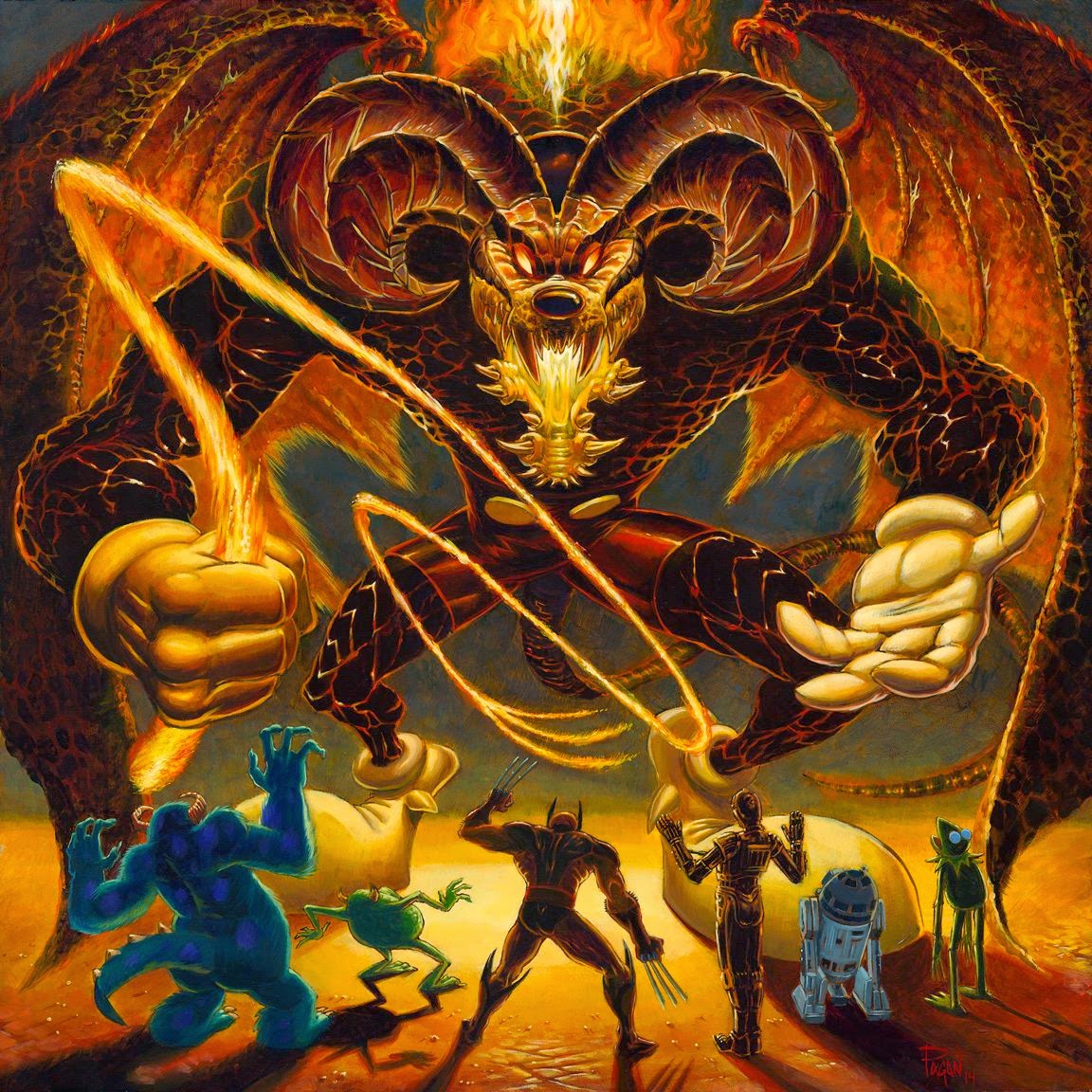 Hey, it's 2015! First post! First off, apologies for anyone that regularly checked this blog. I assure all three of you, that I will be more regular on posts. Leading up to the Gods and Monsters show was a big haul, and I got off track. Also been getting distracted with other social media outlets where I've been posting art, but I need to get back to the blog. Been to long. 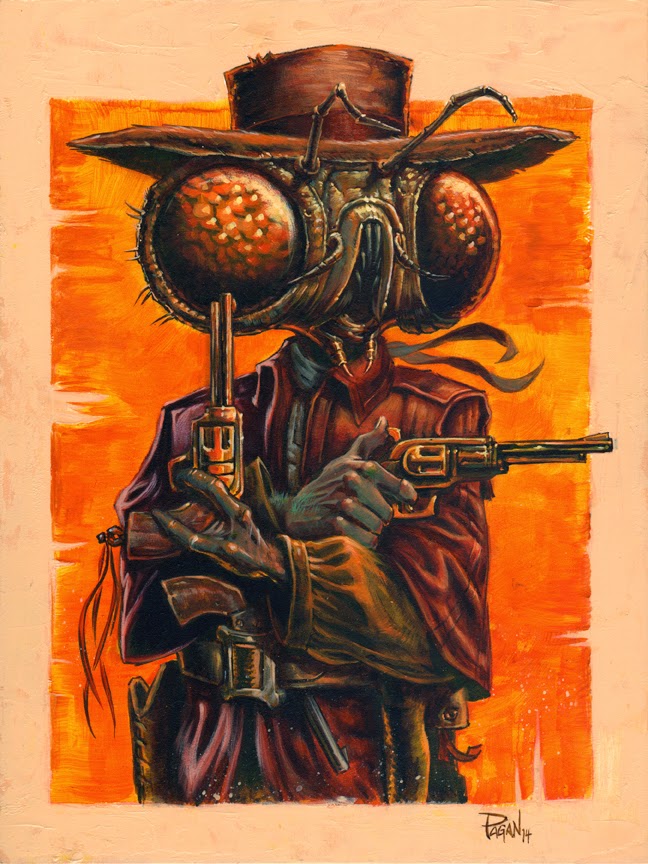 And with that, here are the newest pieces from last year's 2 man show with Aaron Jasinski.
Nine new paintings. Enjoy! 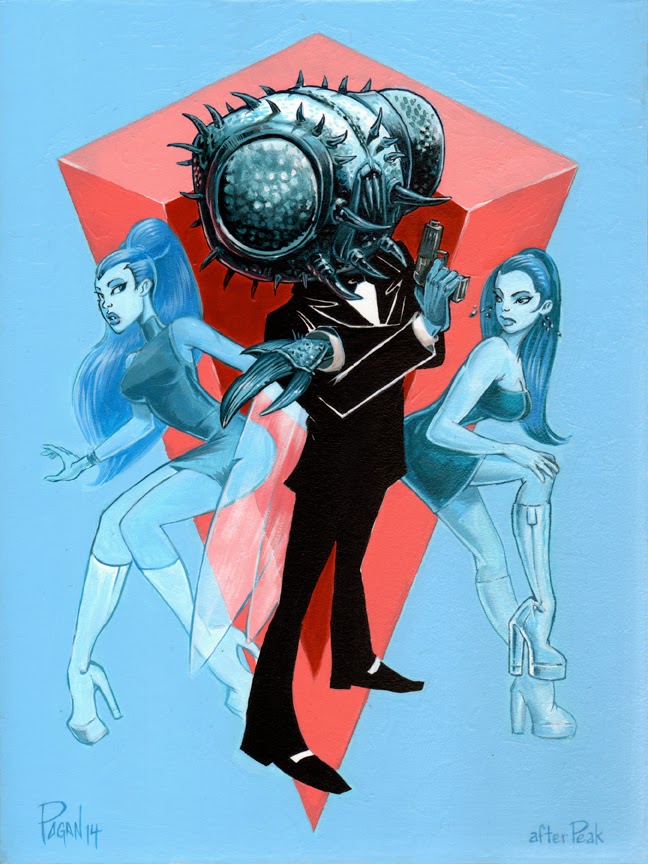 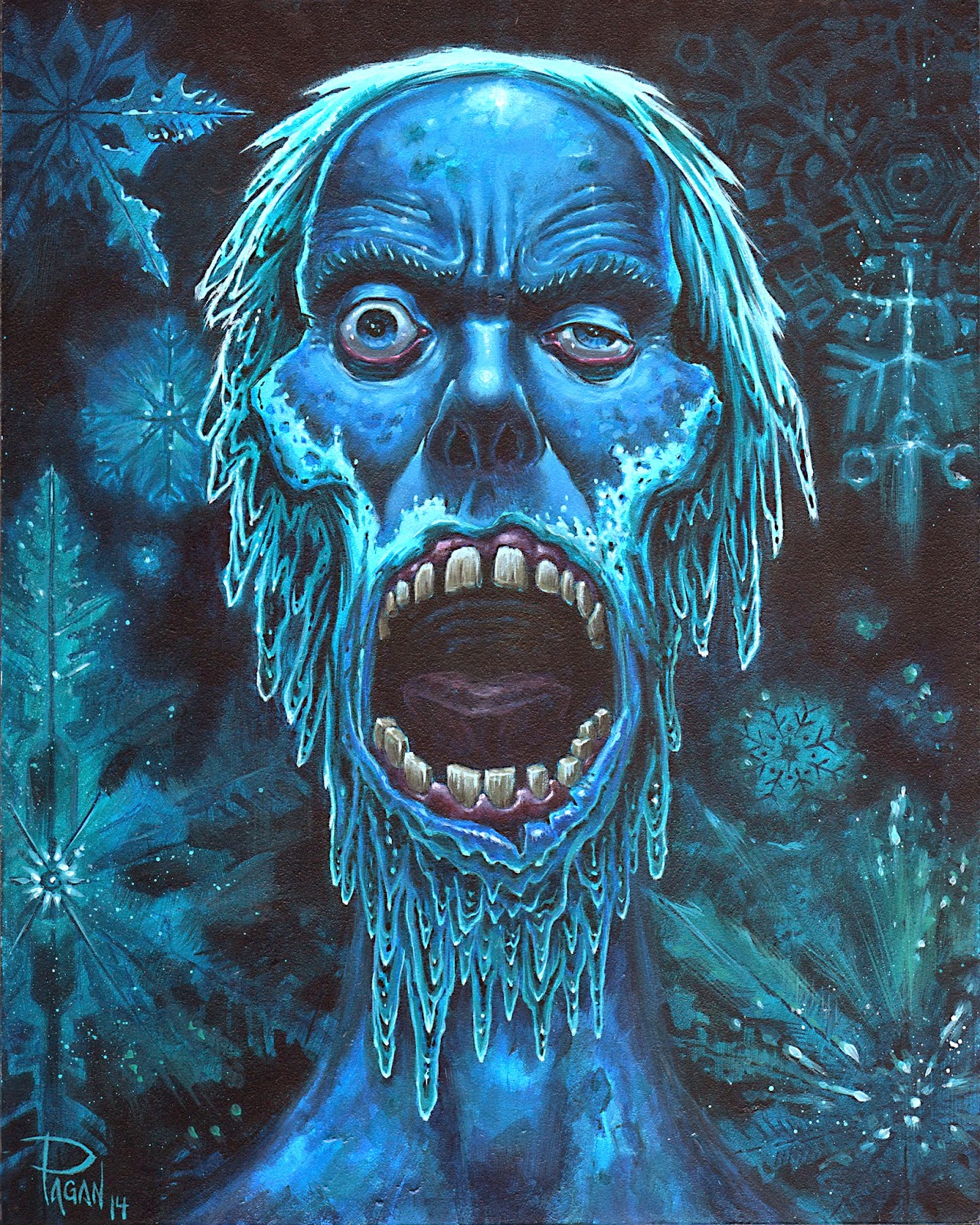 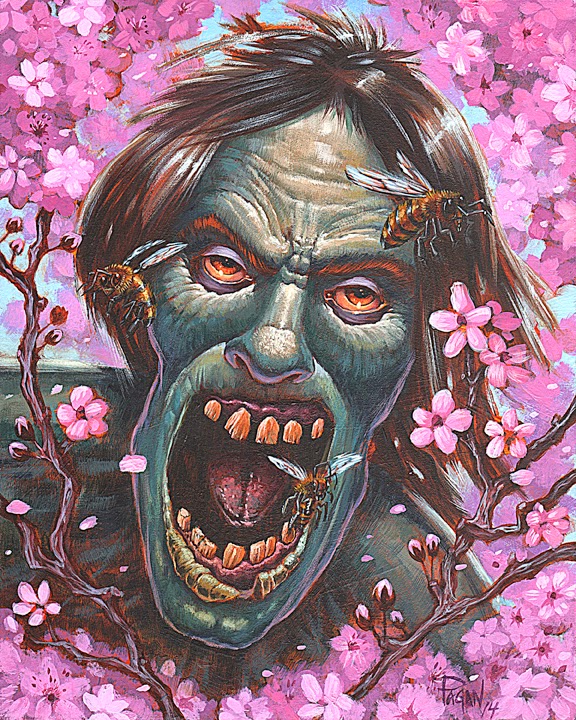 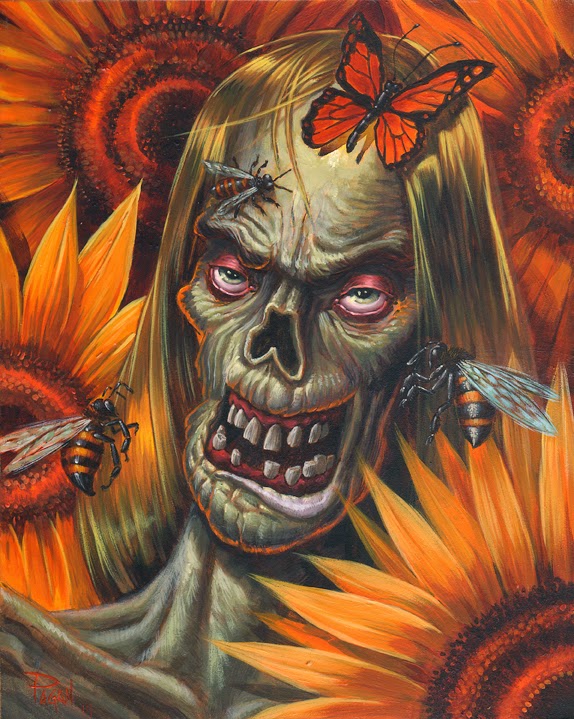 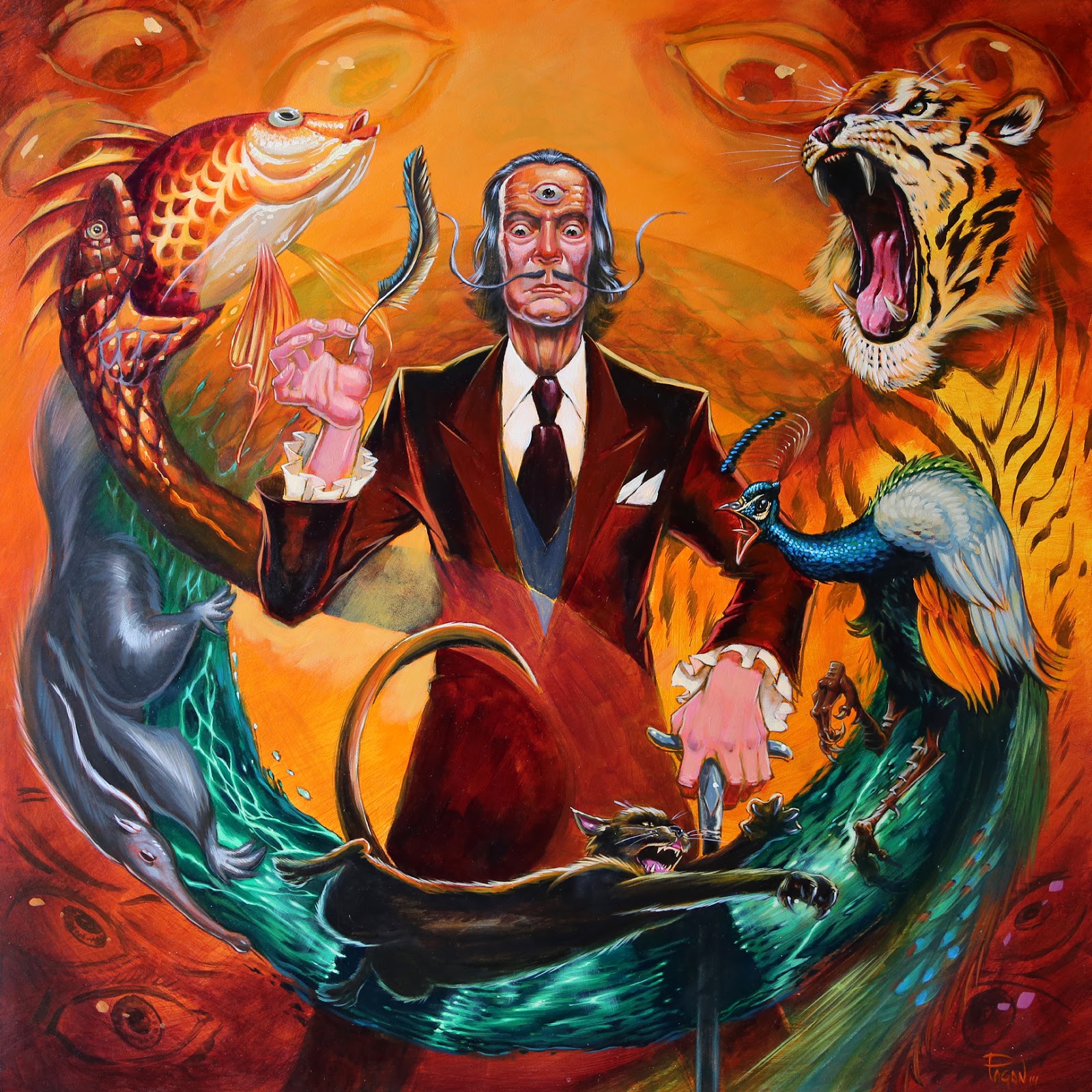 
Posted by Augie Pagan at 12:31 AM No comments: Links to this post