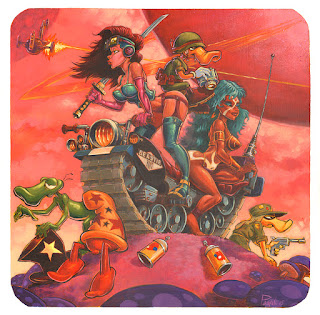 
This latest painting is from a Bode tribute show put on by Fantagraphics. It was also the release of "Cheech Wizard's Book of Me" which is a great compilation of Cheech Wizard art and comic strips from Vaughn Bode and his son Mark. The world of Vaughn Bode's Cheech Wizard is pretty iconic. I can still remember coming across Vaughn Bode's universe of characters in the 80's, when the indy comic scene was first exploding. There was something about those characters....I can't even put my finger on it. It was just refreshing as a young comic nerd to see something so original come from one artist that didn't look like anything else on the comic stands and it hinted at something beyond that you wanted to explore. Anyway, if you're not familiar with Cheech Wizard (shame on you) go pick up the new book from Fantagraphics.

For any inquiries about the painting, contatct Larry Reid at Fantagraphics.
larryjreid@comcast.net 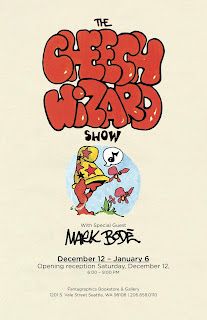 Posted by Augie Pagan at 1:16 PM No comments: Links to this post

Gallery 19988's latest group show is inspired by Sega Genesis and Super Nintendo.
The great thing about working in the video game industry is that playing video games is also research. All I can say is back in the 90's, at my first video game job, we researched the f#@k out of Street Fighter. Lots of good times playing with friends and cohorts. Good times. 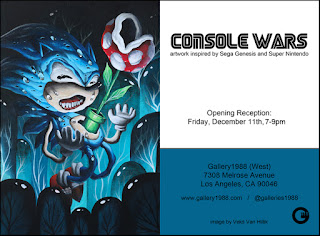 Posted by Augie Pagan at 1:25 PM No comments: Links to this post