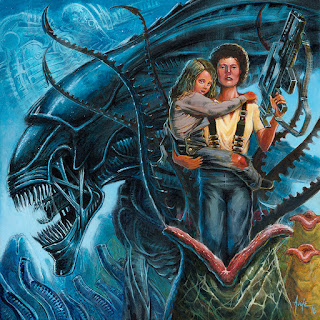 Gallery 1988's latest group show celebrates the movies from 1986. I chose James Cameron's movie, ALIENS. I thought Cameron did a great job with the mom angle in this version of the  Aliens
franchise between Ripley and the alien queen. The director's cut emphasizes this even more. There's a great scene where we see Ripley coming to grips with not being able to see her daughter grow up. In this version, we learn that, while being in cryogenic sleep, Ripley's daughter has already grown up, had a life, and (SPOILERS!) died. That scene gives the Ripley/Newt relationship more weight when we see them bond during the movie. Anyway, just go see the movie if you haven't already, and try to track down the director's cut. Deets for tomorrow's show below. 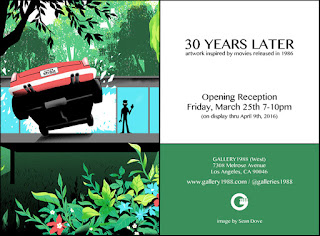 Posted by Augie Pagan at 4:05 PM No comments: Links to this post