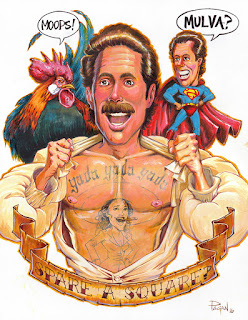 It's another art show about nothing. Seinfeld! Tonight at Gallery 1988 (East) is the 2nd Seinfeld tribute show. I can still watch these episodes over and over, and I'm still blown away at how many quotable lines people still use to this day. I threw in 10 random references from the show into this piece. It's all centered around a not so subtle nod to Danny Trejo's treatment of his chest tattoo, but instead, with Elaine in her urban sombrero. While doing research for the show I also found out this tidbit about the now famous music intro. Television music composer, Jonathan Wolff, treated Jerry's voice from his opening monologue, as a musical instrument and wrote the tune around that. Even more interesting, each opening theme is slightly different. He would pace everything around the rhythm of Jerry's bits, as not to interfere with the jokes. I thought that was pretty neat. Anyway, you can watch his interview here from an old episode of E! News. 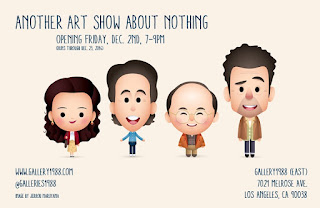